about
🔍
browse all music
random pick

I'm a singer, songwriter, multi-instrumentalist, producer, and recording engineer. I made this site to share what I do with you. You might have heard me play at the Skunk Hollow Tavern open mic on Wednesday nights in Hartland Four Corners, VT, where I've been playing since April 2011. Here's a playlist of songs I've played at the open mic. I've got a home recording studio and I've set up the gear at several locations for live recordings of jams with various combinations of a small group of my life-long friends. There are hundreds and hundreds of recordings here of songs I improvised or crafted, alone or with some friends, going all the way back to 1979. Sometimes I write a little story highlighting one of my favorite recordings, called the pick of the week. They're a great way to browse the music here and get an idea of what I've been up to for the past 40 years, and there are usually a few pictures. There's one 'pick of the week', selected randomly, below. Playback controls are above.

Here's a tune from The Raid on Moonfish, the recording session in Ithaca's Moonfish Studio on September 2-3, 1983. Tim was just about to go off to college at Hartwick in Oneonta, while I'd be staying in Ithaca at Cornell and Jon would be starting his senior year at Ithaca High School. There was some uncertainty about what would happen, but hope for our rockstar future still burned, poignantly climaxing in the double-time ending with the 12-string acoustic guitar overdub. Here are some notes from The Raid Records:

We set up in the studio, Jon using his entire set except he used their snare, their floortom in place of the jap, and their tom in place of his power toms. (See, Moonfish has their own drumset.) (see diagram)

Kurt Rodeheaver (love that name!) engineered us. There was a direct and amp signal from both guitar and bass -- so 10 channels were used by: drums (6), guitar and bass, and that was all that was ever used at once except "More Than A Memory" which was done with a live vocal. They had a tape echo which sounds pretty decent. Guitar was split left to right with the two signals, one of which was echoed. Bass centered...It took until about 12:30 -- 4.5 hours bout.

Saturday the third, we scheduled a mixdown session with Kurt. Tim stayed home and packed. Jon and Gino and Andy went down and worked out the mixdown from 3 or 4 tracks to Jon's cassette deck...2 hours total time remixing.

Pretty pleasing. Definitely worth the money and hours of effort.

Silence is excellent. The 12 string isn't prominent but thickens up the refrains and the finale. What a great last song. 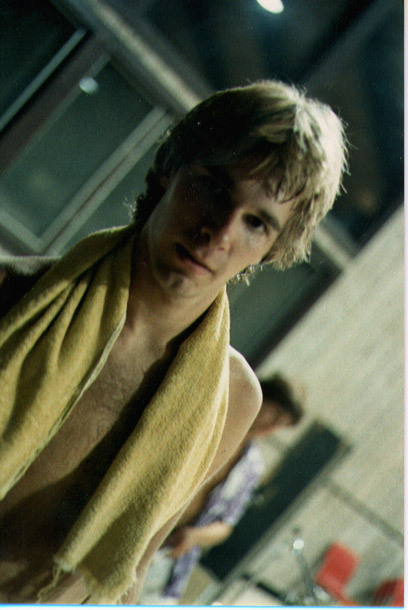 Tim plays a wicked cool bass solo. Jon's drums are super crisp and tight. We recorded guitar, bass, and drums live, then overdubbed the vocals and 12-string acoustic guitar. This appears on the CD The Raid. Another version from 1986 appears on the album Brown Carpet and Full Moon, and a far out silence dub is on the Brown Carpet Scraps album.