This week I'm going to share an accidental recording of a cover song I made on Saturday night at a really fun gig I played. Of course, there's a story to tell about it.

About 6 weeks ago I received an email from my older brother Doug saying "This is a shot in the dark, but would you have any interest in coming to Ithaca to play a gig at the IHS class of '80 reunion?" I immediately replied "Count me in!" and "I'm psyched". 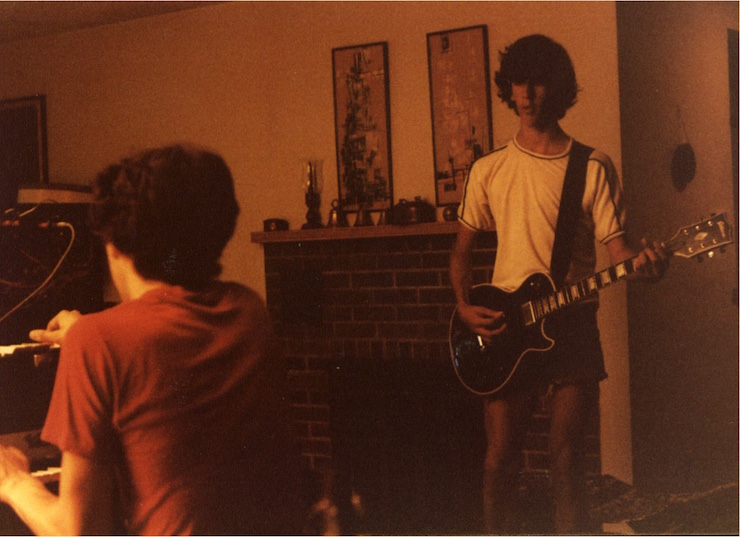 Doug is 3 years older than me, but because he started school while our family was living in London, he was 4 grades ahead of me. That was a pretty large gap for kids, and we weren't especially close growing up, and we didn't have any mutual friends or musical collaborators. In some ways, I felt somewhat competitive having to try to follow his impressive musical footsteps. He got really into piano, then Fender Rhodes, then synthesizers, playing jazz, fusion, and progressive music. So I tried to differentiate, getting really into electric and acoustic guitars, playing rock, reggae, and blues music. We played together only maybe a dozen times as teens, and the last time was probably when I was 15 and he was 18, sometime around the picture here. We never played in public together.

Of course, my friends and I watched and admired a lot of the older musicians ahead of us in school. This included Doug and a great group of musical collaborators he played with, and a lot of them were going to be part of this IHS class of '80 reunion jam. (Doug's actually class of '79 and I'm '83.) Tim Reppert the super-talented bassist was the musical director for this "1970's Jam Band" gig, and did a great job planning out the set list, coordinating who'd play on which song, and sending out MP3s and lyrics and charts for all the songs. And we rehearsed in his professional recording studio, REP Studio, in downtown Ithaca. 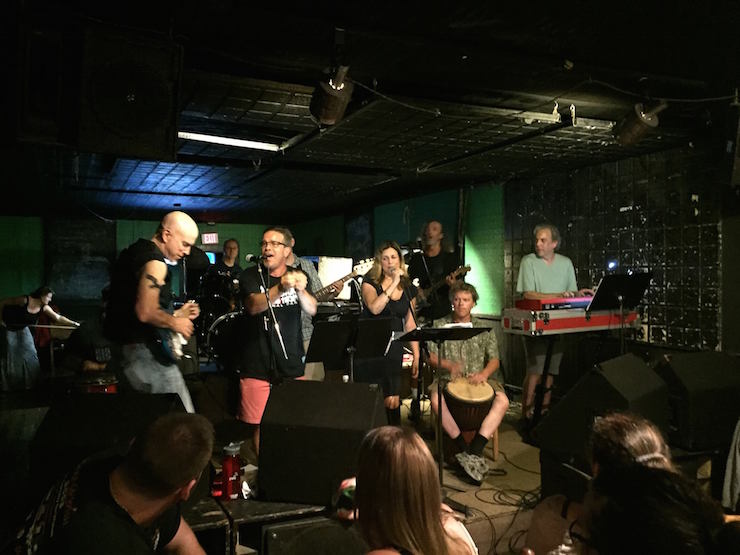 So, it felt like an honor to play with these guys since I'd always looked up to them. However, I felt really confident in my ability to take on the challenge of learning a lot of new songs and playing them with a lot of really good players. This confidence came from the 4 years of regularly playing bass at the Wednesday night weekly open mic at the Skunk Hollow Tavern, just seven miles up the road in Hartland Four Corners, VT. I play bass for a variety of players every week, and I certainly don't always know the song. Still, I had to cram to learn some riffs and licks in order to not embarrass myself.

The tunes in the setlist that got me the most excited were the funk songs like "Pick up the Pieces" and "Cut the Cake" by The Average White Band, "Play That Funky Music", plus three songs by Bob Marley. I've played with a saxophone player a few times at the Skunk over the last few years, but I've never played with a horn section playing pre-arranged parts doing funky stabs and harmony lines. It was so exciting for me in rehearsal Friday night that these songs kept fighting for airtime in my head all day Saturday.

The Nines was super crowded and we had blast playing and had a great response from the audience. Somehow, in the middle of the second set, I took my iPhone out to take a picture and ended up starting up a movie without realizing it. I put my phone back in my pocket and we soon started up "Pick up the Pieces". This is the audio track of that pocket movie, trimmed down to just this song. It's a bit heavy on my rhythm guitar since it was recorded in my pocket standing right in front of my amp, but you can hear everyone else pretty well: Charlie Shew on drum kit, Tim Reppert on bass, Chris Koch on guitar, Doug Wyatt on keyboards, Barbara Wager on saxophone, Will Lloyd on trumpet, and Blake Smith on vocals. 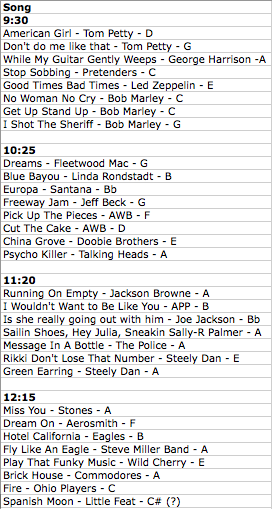