In December 2007, three years before I moved here from Ithaca, I spent three weeks living in Vermont, housesitting for my son and daughter-in-law while they were off on a trip to New Zealand --before the grandkids. 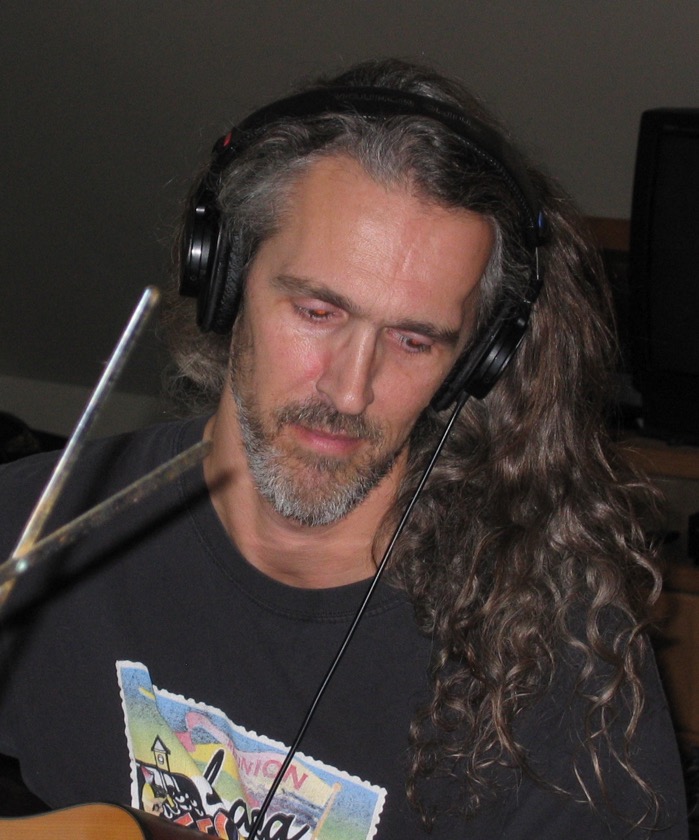 (I wrote about this a while ago for the song "dreaming dog", and more recently for the song "want need give", both from the same unfinished album.) It was fun having about 12 days to focus on playing around in the studio, but I wish I hadn't had to do my real job at the same time. Still, it was a great opportunity and a lot of fun, and some really neat bits came from it.

This is one of my favorites, from the first night all set up in the studio, Monday December 10. I'd done a good, session-opening guitar improv, then got into this keyboardy space. I programmed a drum pattern in Logic, then plopped in some sampled bass to go along, then some modeled Fender Rhodes electric piano, then some sampled grand piano playing a little melody, then some sampled steel drums, then (why not?) some sampled cellos! I obsessed over this yummy textural loop as I built it up, then got out my Strat. I dialed in a sub-bass plug-in, like Jimmy Page used on Zep's "Fool in the Rain", that adds a note one octave and another two octaves below what I was playing. I thought it worked particularly well with the extreme string bending I was doing at times. Digital reverb and simulated tape echo were used generously. Then I improvised some vocals, mostly babbling. I looked for a B part and kept hearing something out of the corner of my ear, but just recorded some spazzing out with the cello sampler and that was it for the night. I'd hit a wall. Sometime later, maybe the next night, I found the B part, and recorded the really bendy guitar melody I heard (but I mixed it a little too loud!).

I collected all the improvised tunes from this session into an album called uncoil, and the more structured but largely unfinished tunes like this one are on the album snowcats and sundogs .