This is an unfinished song that began on a business trip to Belgium in October 2008. I haven't really written any lyrics, and these vocals are just improvised, but I love the music --the combination of soulful piano, wailing electric guitar, eurosynth throbbing, and crazy babbling vocals and exclamations really captured something about the feel of the last two nights of the trip. This is kind of a long story, so please go ahead and hit PLAY, and then read about the inspiration for this song while you listen. 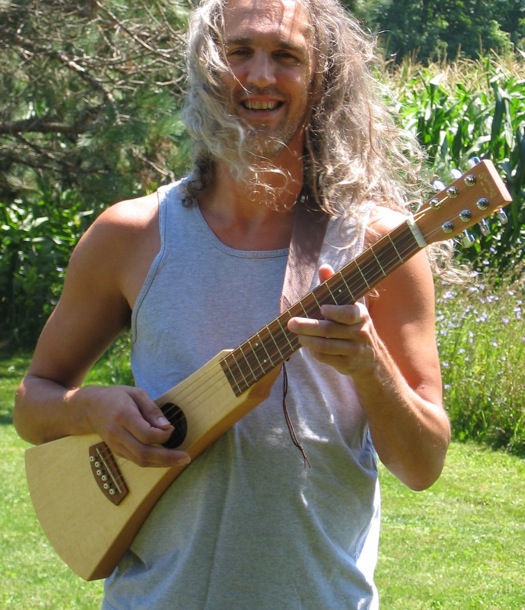 I had my new Martin Backpacker along with me for this trip, and the inspiration for this song took place on two consecutive nights in the heart of old Ghent, Belgium. I was staying at the Ghent Marriot on Korenlei, and after work on Friday I was eating a sandwich and drinking vodka martinis at the hotel bar/restaurant, sitting at the bar. In stumbled a guy who sat down at the bar, one empty chair between us. The guy and I chatted a bit, and he told me his name was Morris. He ended up telling me his tragic story: he was a construction worker from the Netherlands and one day while he was working his house burned down and the fire killed his wife and kids. (What do you say to that?) After a little more chatting, I asked the bartender if he knew of any open mics or blues jams or the like, because I'd brought a guitar and would love to get out and play. Morris overheard this, of course, and declared "I know where to go! Go get your guitar!". So I did. 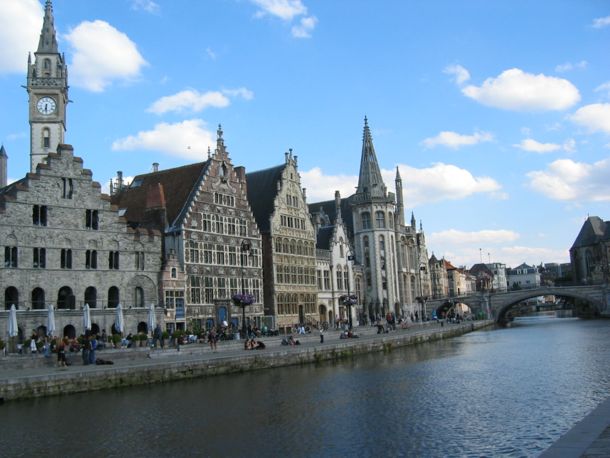 Next thing I knew we were walking down the ancient cobblestone streets past all those old, old buildings and the Leie River. We got to a restaurant with a large outdoor seating area (Het Spijker?) with people clustered around propane patio heaters, and Morris turned to me and said "play something!" So I started strumming some chords (something like the intro to this song) and he walked up to tables with his hand out. I was busking! Apparently we collected a fair bit of change, there and at the next patio up the road. The next stop was the "Hot Club du Gand". I'd actually noticed this bar before, it was at the end of a sketchy looking alleyway, and I hadn't ventured down until tonight. As we approached I got excited as I saw a drum kit, but when we walked in, there was music blasting on the house sound system but no musicians set up. It was already around midnight but this was disappointing. Morris said the jam was already over for the night, and he used the busking money to buy us each a beer. In between each song on the house sound system, he'd tell me "play something, play something!" and I'd strum a few chords and he'd stick out his hand, and before long we had enough for another beer. But after drinking that second beer and chatting with some other patrons, I'd had enough. I said farewell to Morris, and headed out into the night. It was one or two in the morning by now, and the street lights and floodlights on old, old buildings had been turned off, and I have the most magical memory of walking through the moonlit, empty streets playing my guitar and hearing my playing bounce off ancient stone buildings as I walked along the river. It will echo in my memory forever. 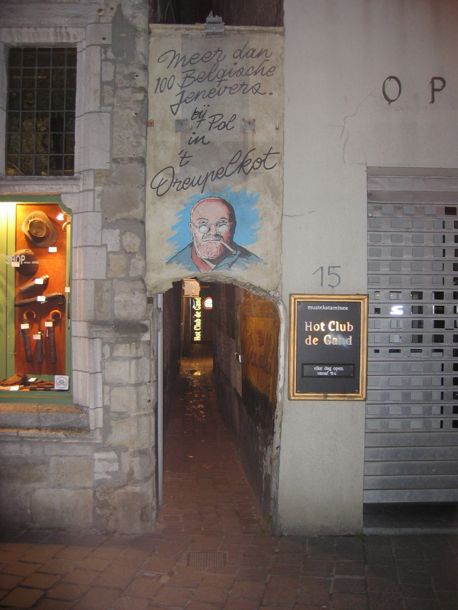 (In 2011, I returned and went with some colleagues to the other bar advertised in this photo --Pol's bar Dreupelkot with over 100 Belgian gins. Impossible to try them all in one visit!)

I got almost to my hotel, and saw a below-street-level bar just before the Marriott that was still hopping with people. I decided to head in for a nightcap, and ran into several people I knew --the bartenders and servers from the Marriott next door. They greeted me by name and marveled at my little travel guitar. And we drank several Duvels and talked for an hour or more.

This was back in the days when staying over for a Saturday night usually made for a significantly lower airfare, so I had all Saturday to kill before my Sunday morning flight back to the USA. After sleeping in till noon or so, I spent the day aimlessly wandering around the city. That evening, after a late, nice dinner, I went to the Marriott bar and had a few drinks until closing, then ended up next door with the bartenders having after-work drinks again. I had a few beers with the gang, and then they invited me to go out clubbing. First stop was a below-street-level place with a band playing called "White Cat", and they were just jamming on a groove forever and really ramping up the crowd (see photo below --keyboardist out of frame --check the fur on those drums!). 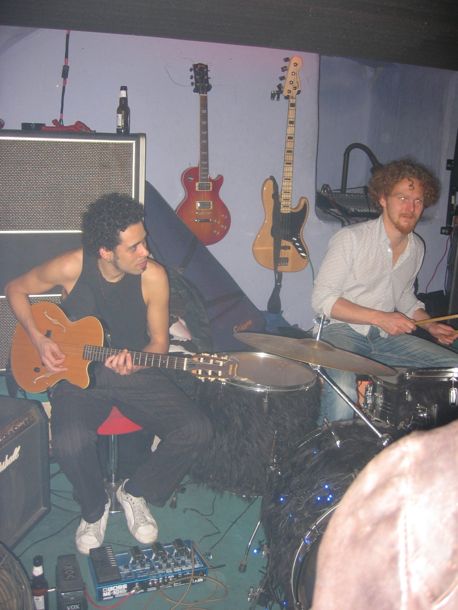 After that we went to another club, where there were two separate rooms with their own DJs and dance floors and bars, and I danced a while -- really enjoying a DJ pumping out the pulsing beats. 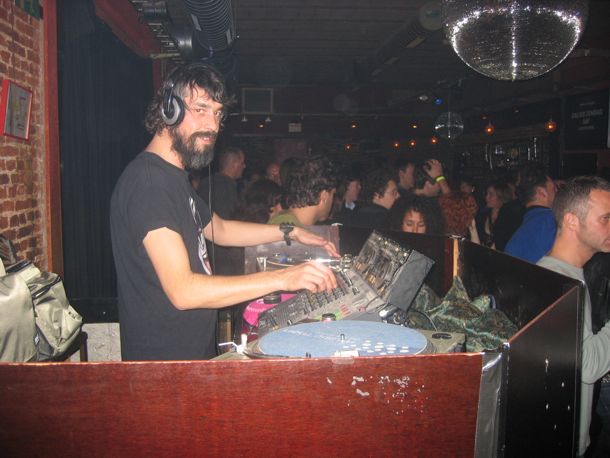 I hope you can hear this progression from busking in cobblestone streets to letting loose in a dance club in the evolution of grooves in this song sketch. I wish I could capture this story in lyrics and complete this song.

This is mix 5 of a song with no finished lyrics, but I got attached to all the babbling I do on this scratch vocal track, and released it on my 2013 album all over the map. This was recorded at mangobananas studios, Ithaca, NY, in October and November 2008. The drums and bunches of synths are from an "electronic" project template in Logic Pro, and I layered on a pretty piano melody (sampled grand piano), a track of Martin Backpacker acoustic guitar, three tracks of Les Paul electric guitar, five-string fretless acoustic-guitar-style bass, and two sketch vocal tracks (having a nonsense party most of the time).

Thanks for reading this far, and for listening!