Last week I highlighted a song from my leave of absence in London in the first half of 1986, a six-month recording binge upon first living with a four-track studio. This week's selection is also from those Cranbury Road Studio recordings, but is much more experimental in nature.

The song started innocently enough, with four rocking, interlocking guitar riffs. As I wrote in my studio log "That was pretty neat by itself, but I needed a challenge so I wrote a twisted lyric about mice running around the house backwards, and worked out how to say the whole thing backwards, recorded it backwards, and it comes out forwards and weird!"

This was inspired by a bit George Carlin used to do about a guy named "Otto" who walked backwards in the park saying his name. I spent several hours writing out a script for myself with nonsense words that would lead to a string of phonemes that were the phonemes of the poem in reverse. In other words, the first line from the lyrics, "creepy crawly little things", became the last line in the script, "zignith lultill eelwark eepeerk". You can hear some of what it sounded like in 'otto forwards snippet'. 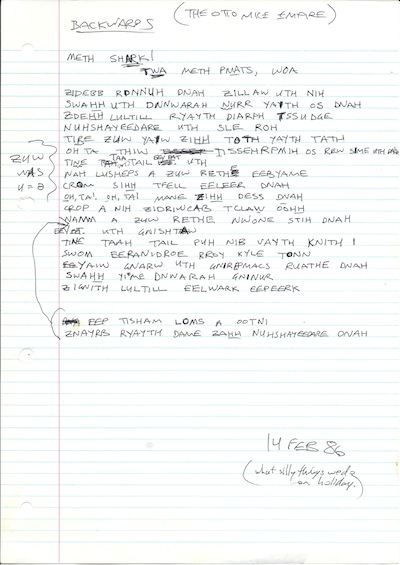 When I started working for SpeechWorks (which became ScanSoft, which became Nuance) 15 years later, I thought a lot about all the time I'd spent trying to transcribe the backwards script. My first job at SpeechWorks was porting the Eloquence text-to-speech engine to the Symbian OS, and I learned a lot about phonetics on the job, including the various alphabets used by linguists to describe phonemes. I wished I'd had this knowledge back in 1986 when I was trying to write out the backwards lyrics.

There were four CDs made from those Cranbury Road Studio tapes, and this is on the one that focuses on the most experimental recordings: 'psychedelic freakbox'. The other three are 'the pops' (with the most accessible pop songs), 'noodle stranger', and 'naive visions').