My old friend and songwriting partner Tim Odell left Ithaca to go live in England back in 2005. When he came back for a visit in November 2007, we spent an afternoon in mangobananas studio. Tim commutes from out around Maidstone into London for his job, and he told me how he'd been musically inspired by the rhythm of the wheels going through the switches just before entering each station. He started playing that on bass, and I worked on programming a drum beat to go with it. While keeping the hi-hat beat steady, we realized we could shift meters and layer them -- I guess it's 6/8 over 4/4. It made us laugh, and groove heavily. I picked up my Strat, applied some of Logic's Guitar Amp Pro modelling, and layered in some of the parts I was hearing, then sliced them into some loops. The rhythm crunch guitar had the low E tuned down to a C, and it gets really heavy. After Tim left I kept playing with the arrangement and instruments, adding piano and cello parts for some added interest. 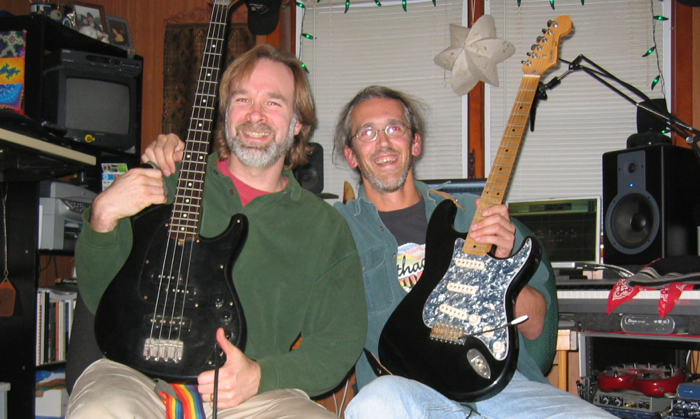 Tim and I have been recording since 1979, and there are hours of cassettes of "The Tim & Andy Band" not yet digitized. Here's what's online so far. He's the bassist in nearly all my bands, including E.B.A. and Killer Whirlpool.

This was released on the 2009 Tim & Andy Band album lefty loosey.