This song was recorded back in August-September of 1996. It started, as a lot of my projects did back then, with creating a drum loop, and then layers were built on top of that. I was working at the time on a Macintosh Centris 660AV with Deck II recording software. 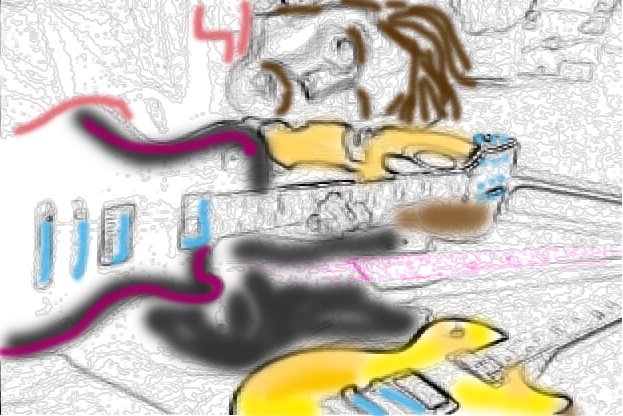 That 25 MHz 68040 processor could handle up to 6 tracks of 16-bit, 44.1 kHz audio, so after recording 6 tracks, I'd bounce the 6 down to 2 tracks, then add up to 4 more before having to make another "6-mix". I started with creating a drum loop using Jon's old Rogers drum kit, which he left at my house for a while there (before giving it to his nephew Dylan). Here are the recording notes from the studio log:

Alone with Jon's old drum kit, now armed with a kick drum pedal, I first recorded some whacky cymbal banging, then some kick drum bumping. Then I found two 22-second loops of decent kick drumming that syncopated nicely and replicated them, then layered a snare drum bit from the scraps over half the loop. I then doubled the cymbal with a really slight Deck delay, and massively delayed a duplicated snare drum track so the echo was a whole beat off (if you'll pardon the expression). Those 6 made the massive drum track first 6-mix (8/14/96). Eric brought home a borrowed Westbury bass, which I played for 2 tracks of bass (unlooped), one massively distorted with my trusty MXR distortion+ (8/18/96). A few nights later, I played my les paul for a few galvanizing, mesmerizing minutes, and doubled that track for the next 6-mix (8/23/96). That same night I did another les paul strummy track, and an excessively fuzzy and bassy les paul track doing a really good wild solo that I'm mixing low for the whole tune now. Instrumental? It's short enough! And pretty freakin awesome!!! Rockin. Then a little later, the lyrics overwhelmed me, poured into my journal this morning and tonight so I recorded four vocals, outa sight! (9/12/96). The first vocal is rapping, very close mike, hot signal, doubled. That finished a six-batch so I mixed down and added a doubled smooth, melodic main vocal for the choruses, then two harmonies. WOW!

This was released on the album leave a trace in 1997.