This is an unfinished song that was recorded during a family vacation in early May 2011 to the Caribbean island Anguilla. Anguilla has really beautiful beaches, fantastic restaurants, and friendly people --highly recommended! 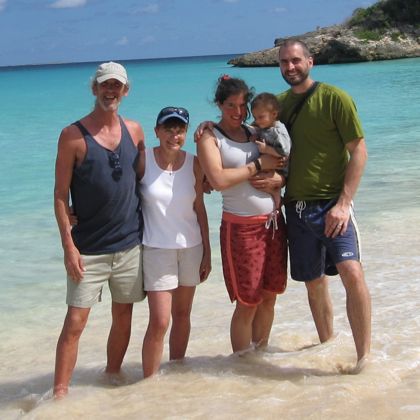 I had my Martin Backpacker travel guitar with me, as well as an iPad (gen 1) with GarageBand. My family and I were sitting around reading one night, and a ceiling fan was making a steady, rhythmic croaking noise that started churning up something in my head that turned into this bass riff and beat. I pulled out the iPad and headphones and created a new project called "ceiling fan", then used the quite playable touch instruments in GarageBand to lay down the drums, bass guitar, clavinet, organ, and piano. Then I took my Backpacker out to the beach and recorded acoustic guitar and a vocal melody sketch with improvised lyrics. The lyrics were inspired from watching the pure joy on my 18-month-old grandson's face when playing in the waves, and the beautiful, smiling new moon that night.

I also had some musical inspiration from a few nights previous when Barbara and I had been out at dinner at Smokey's and a band, called The Musical Brothers, had started playing. My first impression is that it was going to be just two brothers, one with a stack of keyboards and another guy just singing, but things grew and grew as the night went on. As the lead singer said after the first song or two, "as it gets later, it gets greater!" Eventually, there were three more guys with vocal mics bustling around and doing some occasionally nice harmonies. They started with a couple Bob Marley songs, and B wondered out loud if bands in the Caribbean get tired of being expected to play Bob Marley songs. I imagine so.

The drums were practically the same reggae beat on a drum machine for the first hour or more. But the guys really were good, and a guitarist joined the band after 5 or 6 songs. And I was impressed with the keyboard player's ability to play really authentic bass lines --I thought it might even be programmed. But then they did a reggae version of "The Twist" that ended up going into a more rock feel, and I heard the bass part going off of solid and couldn't believe it was the keyboard player. And indeed, when I stuck my head through the open window by our table, I could see a bassist. I said something to B about it. At that very moment, one of our servers walked up and heard my comment. He asked "Do you play? You play bass?" I said, "Yeah, I play --bass, guitar, keyboards, sing..." And so he said, "Cool, I'll get you up to play with the band!" and walked away. The band soon ended "The Twist" (with a reggae twist) and I saw our server talking to the lead singer and gesturing towards me. Next thing I knew, he came back and said "You're on!" And next thing I knew I was strapping on a 5-string bass and jamming out on the same tune for 5-8 minutes with B dancing and taking pictures. What a blast!! 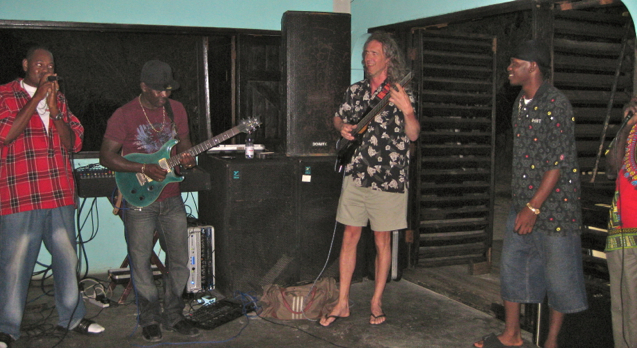 We stuck around a while enjoying the music and the crowd that built up, dancing the night away. The Musical Brothers were pros, really friendly, and I thank them for the unforgettable, fun night.

The day after recording the first sketch of this on the beach, I kept thinking if I could somehow go back in time and show the 15-year-old Andy GarageBand on an iPad, he'd think I was from the year 2525. It's magically unbelievable!

Back home in the new Vermont version of mangobananas studio, I brought the project from the iPad into Logic Pro and added the second part (where there's no singing and wind noise) that had come to me while playing my dog-walking guitar in the woods. Now I'm stuck where I'm usually stuck --waiting to finish the words. 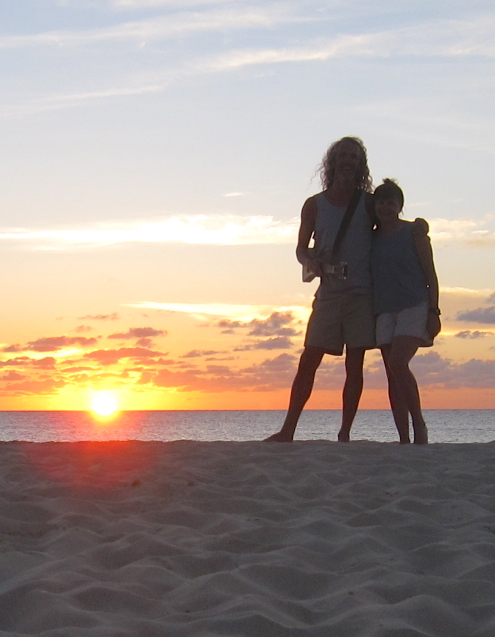