I wrote this song late at night on a beach in Biloxi, MS, in June 1990. Earlier in the vacation, we'd been in Mexico Beach, FL, with friends. One of the highlights was running around with their toddler on the beach at night chasing sand crabs with a flashlight. Another was going out on a pontoon boat and feeding fish to dolphins. 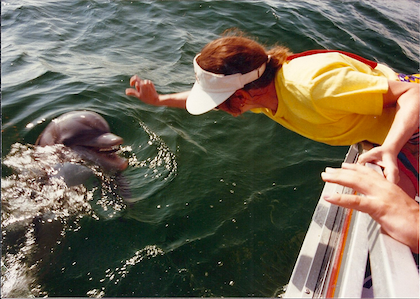 Then we went to Biloxi to visit Barbara's sister and family, and one night I took my guitar down to the Gulf. I was alone, looking at the stars, wondering about life in outer space, and life on Earth, and the chances of humans surviving, and whether the crabs and dolphins would outlast us silly humans. Are we the only things alive in this unimaginably vast universe? Seems improbable, but with such incredible distances between us, how will we ever know each other?

Of course, there are parallel themes right here on Earth.

I've had a good time playing this song at the Skunk Hollow Tavern open mic Wednesday nights, and here's a video of me playing it at the "Brownsville's Got Talent" show in June 2012.

This recording from 2007, mangobananas studios, Ithaca, NY. All sounds by me except Jon Morse on drum kit.

This is from the album refresher. There's an older version of the song from 1995 here, and an even older, simpler recording from 1991 here.