I recently read online that Mayers in Ithaca (NY) is closing at the end of June, after 117 years in business. When I used to work in downtown Ithaca (1998-2005), in the same office that first housed Nokia then SpeechWorks -> ScanSoft ( -> Nuance), I patronized Mayers frequently. 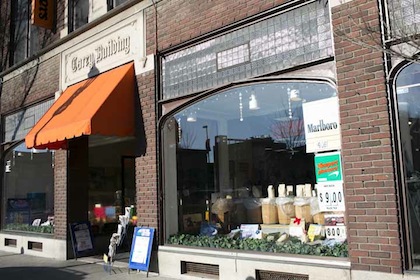 They had the biggest selection of magazines around, and I used to pick up Music/Sound Output, Recording, Sound on Sound and other music/recording magazines there. They sold really good coffee, too, so I'd often grab a cup to go. They also had an ATM for my bank (CFCU), and a great selection of books and calendars. I remember when I was a kid getting comic books there, and sneaking a peek as I walked past guys in the corner browsing the "adult" magazines.

Since reading about Mayers closing, I've been thinking about this song I wrote back in 2005 that I called "mayers". Why did I name it that? Well, sometimes the words come first, and I write music to the rhythm of the words. That's how it was for most of the songs written for my band E.B.A. back in the eighties, with Tim writing almost all the lyrics and my coming up with most of the musical ideas (but a lot of contributions from Jon and Tim). But the creation of music is a completely nonsensical mystery to me, and it doesn't stop happening in the absence of lyrics. The music keeps "appearing" almost every time I pick up an instrument, at least dressed up in an illusion of being something new and different (even if it's all been done before). I really wish words came as easily!

So, when recording music before lyrics, one of the little practical problems is that you have to name your project before you know the name of the song. Sometimes I just look around the room and make up a project name based on something I see, so maybe there was one of those orange and white striped paper bags from Mayers with a couple of music magazines sitting on my desk... I don't remember. 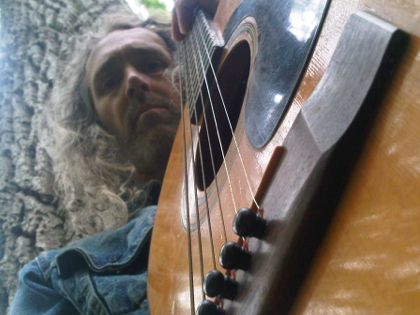 The song idea (guitar part and melody) was written while walking my dog Zoe with my dogwalking guitar back on April 23, 2005, and recorded there in the woods onto a cell phone. This re-recording was done around Labor Day 2006 in mangobananas studio, Ithaca, NY, with a pretty big production.

Recording details: I started in Logic writing the drum beat in 7/4 and getting the tempo locked in. Then I added piano (Logic EXS24 sampler played with a MIDI keyboard), playing the bass and arpeggios. Next was two tracks of electric guitar plugged straight through my PreSonus FireStudio audio interface into my computer, one clean and compressed, the other nastied up with a dirty Guitar Amp Pro setting and tremolo. Then I added electric bass guitar and acoustic guitar (my 2006 Taylor 310). I had a vocal melody in mind, but no lyrics at all, so I found a nice harmonica sample in Logic's EXS24 and played the melody on my MIDI keyboard. I might end up keeping that and singing over it in harmonies. We'll see. The ending gets a bit twisted, going from the heaviest moment to a long sustain where the dirty guitar got processed through a freeware plugin called Scrubby that samples and spits out bits in rhythm, and a ring shifter. That trippy interlude bridges a fade from all the previous instrumentation to just a Fender Rhodes piano (modelled in Logic, played on a MIDI keyboard) doing a noodling outro. 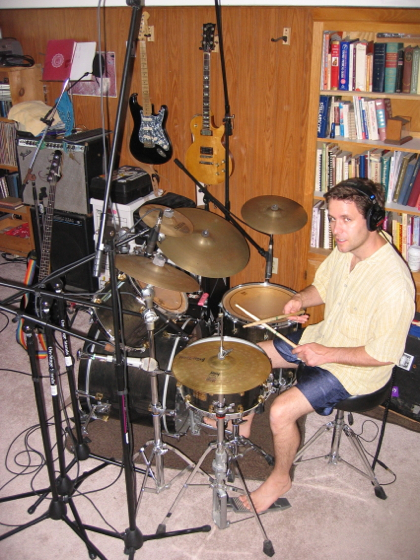 In June 2007, my buddy Jon Morse came over for a session where he overdubbed real drums in place of drums I'd programmed in Logic for several songs, and he tackled this song in 7/4 meter masterfully. He played with ProMark Hot Rods, an awesome drum stick that's somewhere between brushes and sticks, and I love the way he makes the odd meter sound natural, all the little drum fills, and the atmospheric cymbal work in the outro.

This track is on the instrumental 2010 album cymbal monkeys.