In December 2007, my son and daughter-in-law took a five-week trip to New Zealand, and for three of those weeks, I lived in their house in Brownsville, VT. I packed up at least five guitars and a truck-load of gear and set up mangobananas studio in a nice big open space. (My wife and I didn't move to Vermont until 2010.) It was a really busy time at work, but since I've been working from home since 2005, I can do my job from anywhere with high speed Internet service. So every day I'd work until about 4:00, then take their dog Pogo out for a walk on snowshoes on the STAB trails on Mount Ascutney, which were right out the back door. When I got back around 5:00, I'd stoke the wood stove, get dinner, then go to the studio. Each night I'd start with a total improvisation, just hit the Record button and play something and try to sing something sometimes. Then I'd listen over the improv and find a cool pattern or riff or whatever that I had stumbled upon, and try to work up a fully arranged song from that with sequenced drums, keyboards, bass, whatever.

On the fifth full day there, December 15th, I'd gone to town and gotten Chinese food for dinner, and was feeling over-full and spaced out, and wiped out from an epic snowshoe walk with Pogo. He was crashed out on the floor of the studio space, as were the two cats. I did an improv on acoustic guitar, something that meanders through several themes, from some beautiful classical-style playing to what I described at the time as "Foo Fighters chords". That's "VTi5" --the fifth improv of the week. Something in the dreamy explorations of that tune inspired this song. And earlier in the day, as I'd watched Pogo's legs twitching as he dreamed, I'd come up with the line "you dance like a dreaming dog" and scrawled it somewhere. So, watching Pogo dreaming again now, I named my new empty project "dreaming dog" and started playing around on the keyboard, with a classic Fender Rhodes model in Logic. Something clicked, so I hit record and came up with this. Here's what I wrote in my studio log about it: "Is it a Radiohead influence? It felt that way at first but became so much more -- Pink Floyd and I don't know." 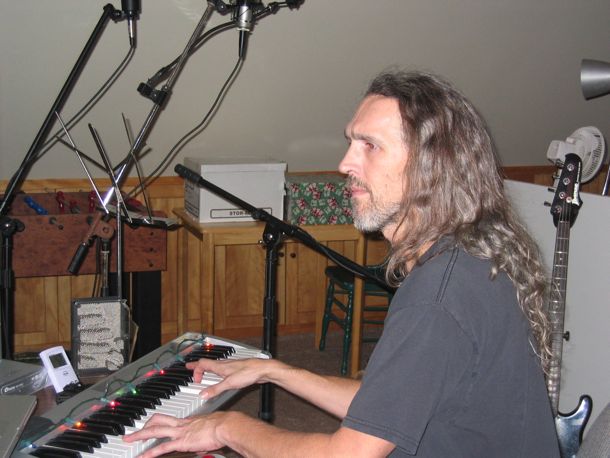 The recording began with the modeled Rhodes riffing to a click (EP88), and there's something in the timing of the sustain pedal that really makes the riff. Then I played sampled drums with my MIDI keyboard (Ultrabeat). Then I added sampled bass, piano, and cello (EXS24). Then I added two tracks of acoustic guitar (Taylor 310), then an in-the-box electric guitar track with a lot of plug-ins (Stratocaster). That was the last for that late night. I came back to it in July 2008, when I replaced the sampled bass with 5-string fretless acoustic bass guitar (Dragonfly).

This is on the album of crafted songs from this session, called snowcats and sundogs. The improv tunes are on uncoil. There's a photo album of that session, too.