This song started on a late night in late November 1997 with a search for more drum loops. I found a song in a tape of a jam by my all-improv band Killer Whirlpool where there were some good sections of Jon playing mostly by himself. So I digitized the whole song into my computer, then cut out cool beats. I spent a while creating several workable drum loops and then I layered in two electric guitars just kinda jamming along in a funky, clicky way. And that was the end of that night. It remained this herky-jerky jam, with working title "dog", as it gestated in my head for 9 months.

In late August 1998 I started working on making this a proper song. I searched the guitar jams for good syncopated loops and arranged them and the different drum loops into a song structure. Then I made up a cool rolling bass part to go along, and recorded electric bass through a Roland bass flanger, with the low bass string tuned way down to a C#. Then I recorded an acoustic guitar track playing some subtle rhythm enhancement. Then I had to write some lyrics, and on a misty morning sitting in my back yard, I came up with these. 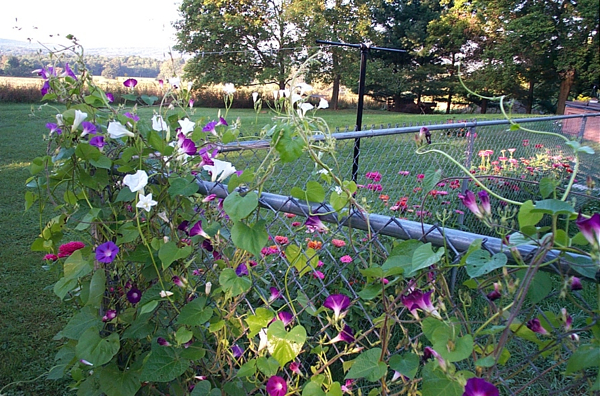 I recorded three tracks of vocals, with the bass flanger on two of them, and some sweet harmonies that remind me now of the Steve Miller Band a bit. The clincher was an acoustic guitar solo played with a steel slide. I don't play much slide guitar, but in the loop right at the very beginning, you can faintly hear Tommy playing a descending bit of electric slide guitar. I echoed that riff in the beginning of the slide solo. This was the first take, improvised beyond that opening riff, and it blew my mind.

Recorded in mangobananas studio, Ithaca, NY, with OSC's Deck II on an Apple Macintosh Centris 660AV. On the album solar from 1999. All sounds by me except the drum loops, which include Jon Morse on drum kit, Pete Bosanko hitting his congas on the side with a stick, and Tommy Whittle playing the faintest bit of electric slide guitar.

download: every day is a new day.mp3
song info
more...