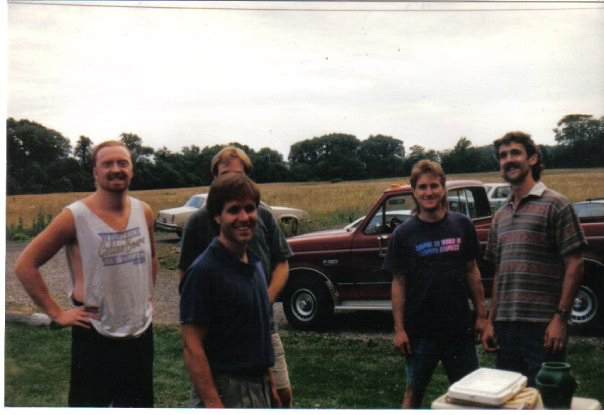 Sometimes it seems like time is zooming by so fast! It's a little over TWENTY YEARS now since my dear old friend and drummer Jon tied the knot with his beloved Liz at the Inn at Taughannock near Ithaca, NY. Of course, this was also a musical occasion, with jamming by the Naked Blues Band and EBA and various combinations. I'm pretty sure that party wasn't recorded, and that's how it should have been. But there was a session a day or two before the ceremony, on July 31, 1997, where the band had to get back together and celebrate. Pete drove from Chicago for this, and we'd planned to have another Voyager reunion. It was the fifth year in row we'd gotten together, after the Blizzard Oasis / Hosepipe (1993), Voyager 94, Voyager 95: Near Beer, and Voyager 96: Ride sessions.

Thing is, Jon and Tim and I had been inspired by the Voyager reunions in '93 and '94 to get together and jam --just make stuff up and enjoy the power of music and the surprise and delight of spontaneity. We'd been inspired to jam, and it had gotten more and more regular, just the E.B.A. trio at first then we brought in Tommy on blues harp and PeBo on congas and guitar. So, we'd been jamming as Killer Whirlpool once a week for over a year before this wedding shindig, so this wasn't going to be a Voyager reunion, it was going to be the start of a six-person improvisation extravaganza we called Killer Voyage, which would carry on a lot longer than any of us expected at the time, I think. And it just kept getting better and better as the years went by...

Anyhow, we'd done two quiet intro pieces ("..." and "home") with just me and Pete while people were getting ready, and this is the first tune with all six of us rocking out. You can hear the joy of playing again, in the biggest ensemble yet. We had the core: Tim on bass, Jon on drums, and me on guitar. Tommy starts out on his busted one-note saxophone, and eventually goes to his trusty blues harp. And we had PeBo grooving down on the cowbell. And Pete is, of course, improvising these lyrics and wailing on guitar (rightward, distorted). It gets into breakdowns and climaxes, and never leaves this stomping cool groove. Way funky sauce!