Today's my dear old friend Pete Downes' 50th birthday! I guess we all knew he'd be wild and rockin' forever, but I'm still glad we all get to experience it now. His Cinnamon Jack channel on YouTube has over a hundred videos, including his latest moody piece "November". His website haveasandwich.com has CDs for sale.

Pete and I have been making music together since we both learned back in 1978-1979. 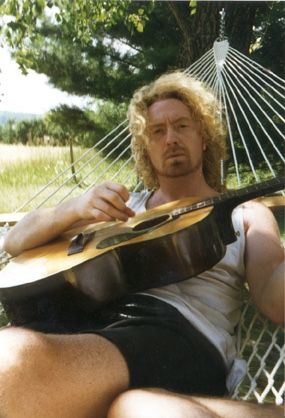 There's no doubt we've been big influences on each other. We were in a band together in junior high school, Voyager, and recorded one epic eponymous album, then he left Ithaca. We had several Voyager reunions in Ithaca and Chicago, in 1993, 1994, 1995, 1996, and 1997. Those inspired me to get back together with E.B.A. to do total improv like Pete does so well, which led to some E.B.A. reunion improv jams and eventually the expanded lineup and new name: Killer Whirlpool. Then when Pete came back to Ithaca in 1997, 2000, 2001, 2003, and 2009, we called the massive improv troupe Killer Voyage. And I visited Pete in Chicago a few times for improv recording sessions that we called White Trash Waterpark and Kentucky Jelly, in 2002, 2005, 2007, and 2012. (Too much of this music isn't online yet!)

I had literally hundreds of songs to choose from to highlight his brilliant, twisted, absurd, and beautiful sense of music. But I chose this one because we were thirty years old and Pete's lyrics talk about the struggle we've both had all our lives of wanting to find a way to play music all the time. This song is far from a masterpiece, but has such a warm fuzzy vibe and cool vocal delivery that it felt like an appropriate tribute to my musical brother.

Recording notes: Pete was visiting Ithaca in June 1995, and spent an afternoon in mangobananas studio. We put together a drum loop with Pete hitting Jon's old hi-hat and me thumping the hi-hat stand with my foot. On top of that, Pete laid down acoustic guitar while I played bass, then Pete improvised the vocals while I played electric guitar. Ended up on The Andy Band album flipping bits.