This song started as a build-up of layers, recorded when my lifelong musical partner Tim Odell was back in town for the first time since moving to England in 2005. It was February 8, 2006, and Tim had asked to spend an afternoon in mangobananas studios with me. We recorded three tracks that day, and this one's my favorite. One of the fun things is that Jon ended up recording the drum kit for this song, replacing the mechanical drum loop I'd programmed with a really dynamic performance. I then did extensive arrangement and recording of additional instruments to create a song sketch. It was a virtual E.B.A. re-union. See if this doesn't get stuck in your head.

Recording notes: Tim wanted to try building up a song with short loops, so I programmed a two-bar drum loop with mouse clicks in Logic's piano roll editor with the Ultrabeat synth, then we layered on six more tracks of four- or eight-bar loops, building up. First Tim played a really simple bass part on my electric bass, rocking back and forth between two whole notes. Then I played a played a clean semi-funky guitar part on Strat. Then Tim recorded what we called "bass zingers", where he did a downward from way up in the high register, with an echo effect on the track. Then I played a guitar part that was a harmony to the first bass part, just rocking back and forth between two notes. The next track is labelled "bass major suck", and it's Tim sort of sliding his finger lightly up and down a string for changing harmonics while picking, with a rack of virtual effects: compressor, EQ, GuitarAmp Pro, Flanger, and Limiter (a preset called Flanged Electric Bass). Then I topped it with another Strat track with a channel strip preset called "Landau Ultra Clean" with some tweaks, playing some high glassy intervals. That looked like this in Logic:

On July 2, 2007, Jon came over for "Jon jam 4", where he replaced robotic drum synth loops with great performances on drum kit for several songs. His kit was miked up with 7 mics, and he did two passes of playing along with the buildup and then continual looping for first ten minutes, then six minutes, while I noodled around on Strat soloing. When mixing and arranging that I found an acoustic guitar part that I layed in for 8 or 10 measures as an alternate part. Recorded that on the Taylor with the usual 2 mic setup on July 5, 2007. Also, while I was walking though the song 2 bars at a time doing drum comps and creating an arrangement of the loops, I heard goovy parts and I played around and recorded with clavinet (EVD6) and piano (EXS24). The piano part is becoming the vocal melody (or counter-melody) in my head. That got me to mix 3 on July 12, 2007 --which is this recording. 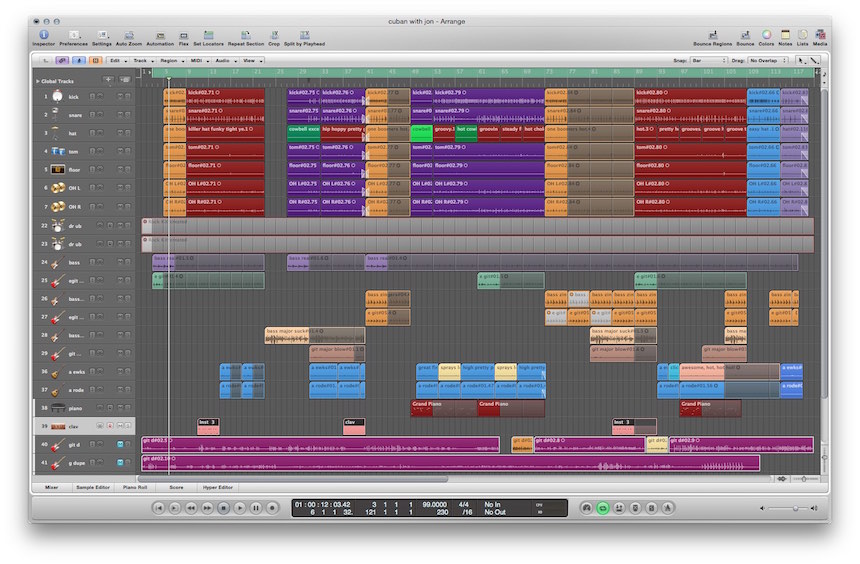 Released in 2009 on the Tim & Andy Band album lefty loosey.