As I sing in my song "leave a trace", "and then there's these songs, improvised or crafted". That line speaks to the two major categories of songs I've recorded: many were recorded in situations where I had little or no idea what I was about to play before hitting the record button, and others are more traditionally written with everything being pretty much worked out and even rehearsed before recording. This goes for my solo "singer/songwriter" work as well as my bands, as I've had a few bands that improvised songs on the spot. I will still, on occasion, completely make up a new song at an open mic, and there are several songs in my open mic repertoire that are never the same twice because the lyrics are more an outline than a script. 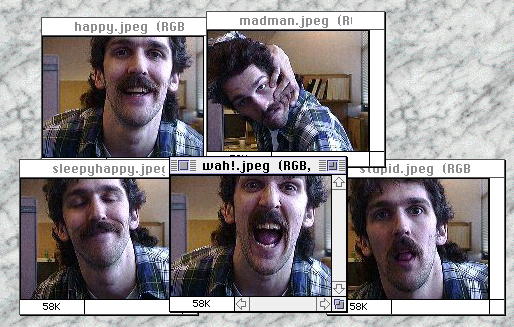 All through the E.B.A. days I found it a liberating and often mind-blowing experience to pick up a guitar and sit down in front of a couple of microphones and hit record without any idea what I was about to do. That led to the dozens of cassette tapes I called "The Andy Band Improv Volume ##" (with ## in roman numerals). Those improv tapes continued long after E.B.A., but were eventually supplanted with doing the same thing at the computer with first OSC's Deck II then Apple's Logic Pro.

In the mid-nineties I digitized my favorite improvisations from The Andy Band Improv Volumes XXIV and XXV and released the all-improv CDs the right tool and liquid planet. This is one of my favorite little melodies and lyrics that popped out. Like my earlier song "it just might help us along", my friend Dave's brilliant song "Can't Go", and probably a few thousand other songs, the words are about the struggle of trying to write a song, or, in this case, pull "words from stone" as the tape rolled. I might have hinted at some other meanings, too.

Recorded with two mics, one pointed towards my acoustic guitar, one more towards my mouth, on May 25, 1995. Released on the all-improv album "liquid planet" in 1995.