My band Everything But Anchovies was a trio: guitar, bass, and drums. Our repertoire always included some covers, and other trios like The Police were a big influence on us. They popularized a reggae-influenced rock, and this song falls in that sphere. Like many of our originals back then, it started with Tim handing me some lyrics, and my coming up with the idea for the music, then the band fleshing out the music together. I think this started with the bass riff popping into my head as I read Tim's lyrics in late December 1984. 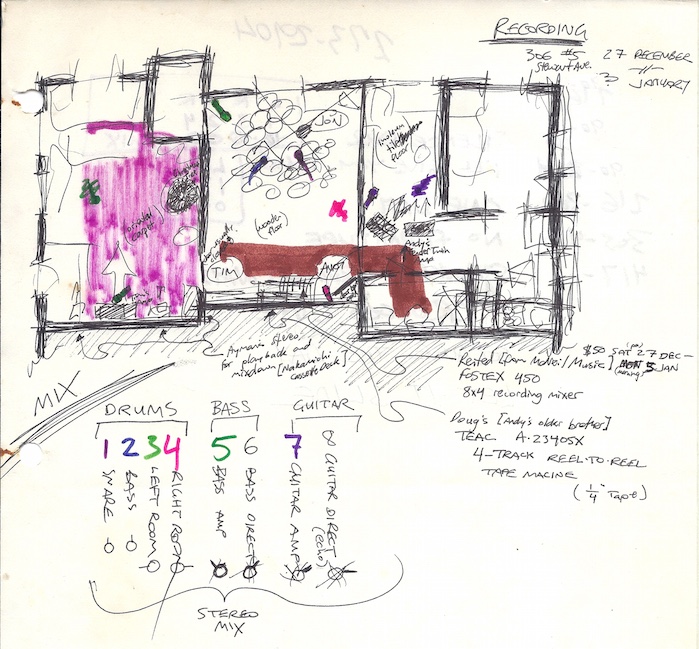 I don't have any inside knowledge about where Tim's lyrics came from. But we always had a blast playing this song, and audiences enjoyed the groove and the drum fills in the breaks leading into the refrain.

This recording is from the classic Brown Carpet Studio session of late December 1986 that ended up on the Brown Carpet & Full Moon album. We set up in my apartment on Stewart Avenue. As shown in the drawing from the studio log, we had 4 mics on the drums, and Jon was set up in the dining room (with no dining table). Tim's bass amp was set up in the front living room, with a mic on it and a direct signal from his amp to the mixing board. He stood near the doorway so he could hear his amp and the drums and so we could all make eye contact. I stood near the other door, with my amp set up where it usually was, in a small, narrow room on the other side of the dining room. I pointed the guitar amp mic away from the amp to catch all the room reflections. I also took the direct, effected signal out of my Roland digital delay unit, which I panned further to the right. All 8 channels were mixed down to stereo before being sent to tape. Then I overdubbed a lead electric guitar to a third track, then the vocal to a fourth track. These were mixed down to a master stereo master cassette.

The drawing also clearly shows the long strip of brown carpet that must have come from a hallway, with its long, thin, "L" shape. This inspired the session's slogan: "Brown Carpet Studios: From the mixing board to the loo, we serve you".

Note: I've been writing these "pick of the week" highlights for a year now. Please check out the archive past picks. We're going to start publishing the "pick of the week" on Wednesdays instead of Sundays for the next year. Much more to come --all the Killer Voyage albums, tons and tons more Killer Whirlpool material, and more Duos projects will roll out in 2015.