I didn't write a 'pick of the week' last week because I was back in my hometown, Ithaca, NY, packing up all the mangobananas studio gear and driving back to Vermont. We had an unforgettably fantastic time Thursday through Sunday. I picked up Pete at the Syracuse Amtrak station at about noon, on my way from Vermont. My SUV was loaded with equipment and guitars, and Pete added his 12-string acoustic. We stopped for a short inaugural jam in Lower Buttermilk Park, then headed to Jon's house. Before too long, Tim and PeBo had joined us, so we had all of Killer Voyage except Tommy, who had to work until 9PM. We worked on arranging Jon's TV loft into our studio, setting up drums, amps, and microphones. Tommy had brought over a PA in the morning, so we got that going, too, for monitoring the vocals and congas. Once we had it all wired and ready to go, we went outside and jumped in Jon's awesome pond, encircled by frogs and cattails. It was over 90F outside, and a little hotter up in the loft. It was great to jam at Jon's house again. In the mid-1990s, it was the site of countless Naked Blues rehearsals and Killer Whirlpool improv sessions, and the first Killer Voyage session in 1997. 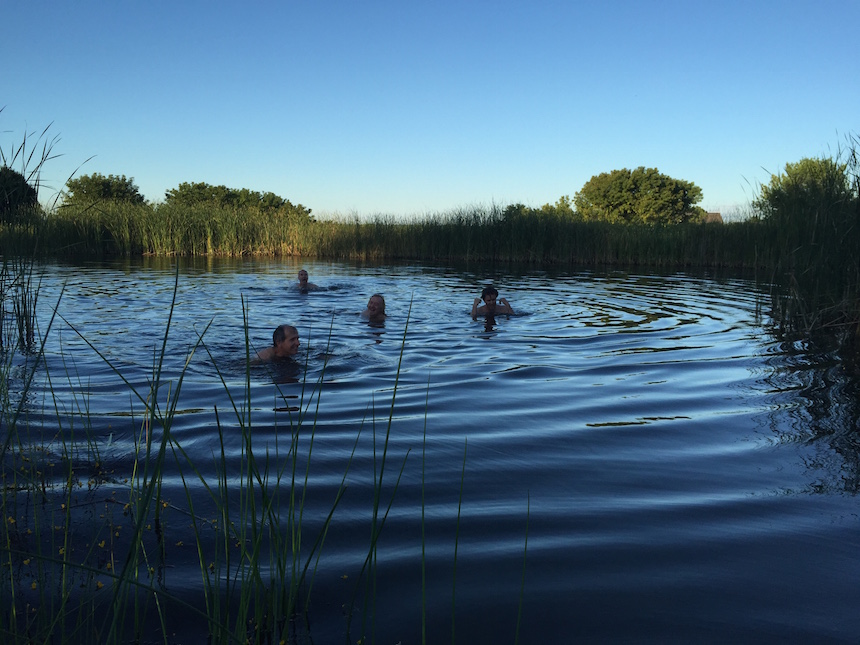 Pete and Tim started making a list on my clipboard of ideas for songs. The list grew and grew as the days passed, and so did lines crossing off titles we'd recorded. We recorded three songs without Tommy: "the power in question", "rudely dudely", and "giant worlds over my head". Then we took a break for dinner. Tommy showed up a little after 9:00, and we went back to the loft and recorded another 14 songs. Friday there were a lot of family things that Jon and Tim needed to do, and we didn't get back to the loft. We did get a bonfire going in Jon's fire pit, and Pete, Tommy, PeBo, and I started playing music around the fire. PeBo had a little stereo voice recorder with him, and recorded a good three hours of us talking and playing. Those recordings have a lot of crickets and frogs, but there are also 15-20 good songs that will end up part of this record. Saturday we had a rare matinee session, making up 6 more songs. We had dinner and socialized a bit down at Taughannock Park, then came back for another session in the loft, laying down 6 more songs. After the first ("blizzard oasis (part 2)"), Jon's sister Ann showed up with her son Dylan and 4 cousins from England who'd just arrived. These cousins were a married couple with two kids, and the younger of the two kids, Sebby, seemed pretty fascinated by our improvisations. Before we started what we declared would be our last song, we asked Sebby what the song should be about. He said, in a soft little English accent, "bananas!". And so we launched into this song. Later, back around the bonfire, Sebby stole the show by improvising lyrics for a couple of songs while Pete and I played guitars.

Recording notes: Jon's playing drum kit, Dylan's on congas, Sebby's older brother Ben is playing on PeBo's electric ukulele, I'm playing electric guitar, Tim's playing bass, Tommy's blowing harp, Pete's singing lead, and just about everyone sings backup vocals on the chorus. I had 14 microphones set up: 5 for vocals, 4 on drum kit, 2 on congas, and 3 on guitar/harp amps. The bass was recorded from a line out on my bass amp. Drum kit and most vocal mics went into my ART TubeOpto8, which feeds into my PreSonus FireStudio 2626 over ADAT Lightpipe. Remaining inputs went into the FireStudio, of course. All recorded into Logic Pro 9 on my MacBook Pro 15-inch (2013). We had a really rough mix set up for listening back, and Jon wanted to give a copy of "bananas" to his cousins on a CD, so I made this rough first mix with no EQ or any processing at all other than setting a few volume faders. 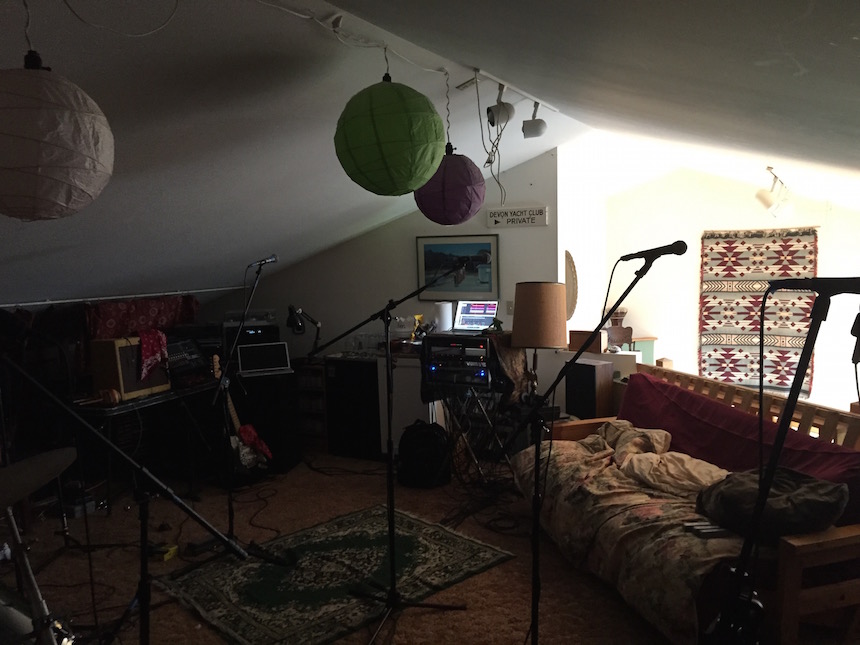 Of course, watch this space for an announcement of when the record gets released. We're tentatively calling this session Amphibious Dude Palace 2015.