This is an instrumental song that came out of nowhere in early February 2009. I had sat down in my studio thinking I'd do a piano improv, but ended up doing something more organized. After getting down the idea for the quirky main riff with a few tracks of grand piano and drum instruments in Logic (EXS24 grand piano and UltraBeat played on my MIDI keyboard), I was trying to come up with a B-part and kept hearing something with an extra beat in it, so I inserted some time signature changes in Logic and captured it. It ends up being 13/4, with parts that can be counted 3/4, 3/4, 4/4, then 3/4. In that 13/4 section I was hearing backwards guitars in my head, and called up a patch that I thought would provide a backwards digital delay for a real instrument, but it turned out to use a sampled backwards electric guitar (in EXS24). I played that on my keyboard, and as much as I am not inclined to ever use sampled guitars when I can play them myself, I really liked the sound of this so I kept it. A few days later I was noodling around on my Strat and found some chords to play over the main part, and recorded three tracks of gorgeous, glassy Strat direct into audio interface with more of that warm tape delay plug-in. I did some automation of the sends to Logic's great-sounding Tape Delay plug-in on an Aux bus, to create some more variety (see below). The result was a track that sounded pretty different from anything I'd ever recorded before, and I was pretty happy with the spontaneous creation. 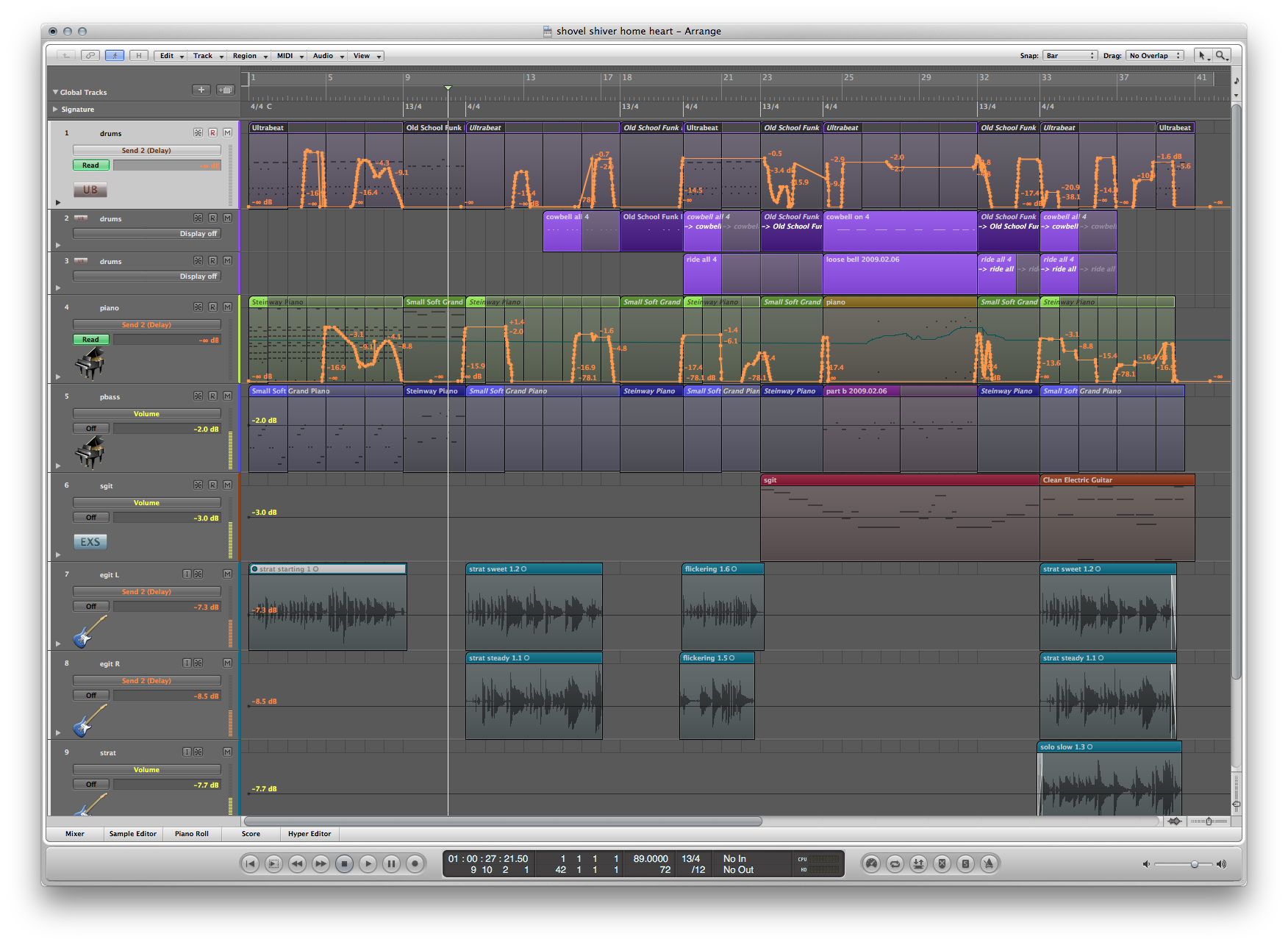 As I've noted before, the thing about recording with a computer is that you have to give a name to a project as soon as you start, and sometimes I have no idea what the name of the song will end up being, because I usually write music before any words come along. So, when I started this project, around lunchtime on Thursday 5 February 2009, I'd been outside shoveling a dump of fresh snow so the driveway would be clear when Barbara got home from work. (And I shoveled off the deck around the hot tub out back, too, of course.) And I guess I felt really warm and happy to be back inside in my warm house.

This ended up on my 2010 album cymbal monkeys, which is all instrumentals. A lot of the songs resulted from my 2005 purchase of Logic 7 (for $500 at the educational discount. I think it was $1000, but now it's $200!), as I gave up my silly sibling-rivalry-based resistance to all things synthetic and MIDI and explored the vast libraries of virtual instruments and sounds in Logic. There's still plenty of guitar on the album, as evidenced in this piece and many others. But I felt I couldn't stay in an analog, vacuum tube world any longer, so I embraced my inner digital cymbal monkey and tried to learn how to play with it and tried to work with these new colors in my imagination. I hope you'll give the whole album a listen and that you'll feel some of the excitement and wonder I felt while recording all 21 songs.