Back on 10 September 2009, I brought my recording gear over to my buddy Jon's house, and we set up in his loft. PeBo also came over, and played my Dragonfly five-string fretless acoustic-guitar-style bass most of the night --although he set up his congas and timbales, too. He also brought his Presonus FireStudio Project 8-channel interface, which we daisy-chained to my FireStudio 2626 for 16 inputs, and we used 12 of them. 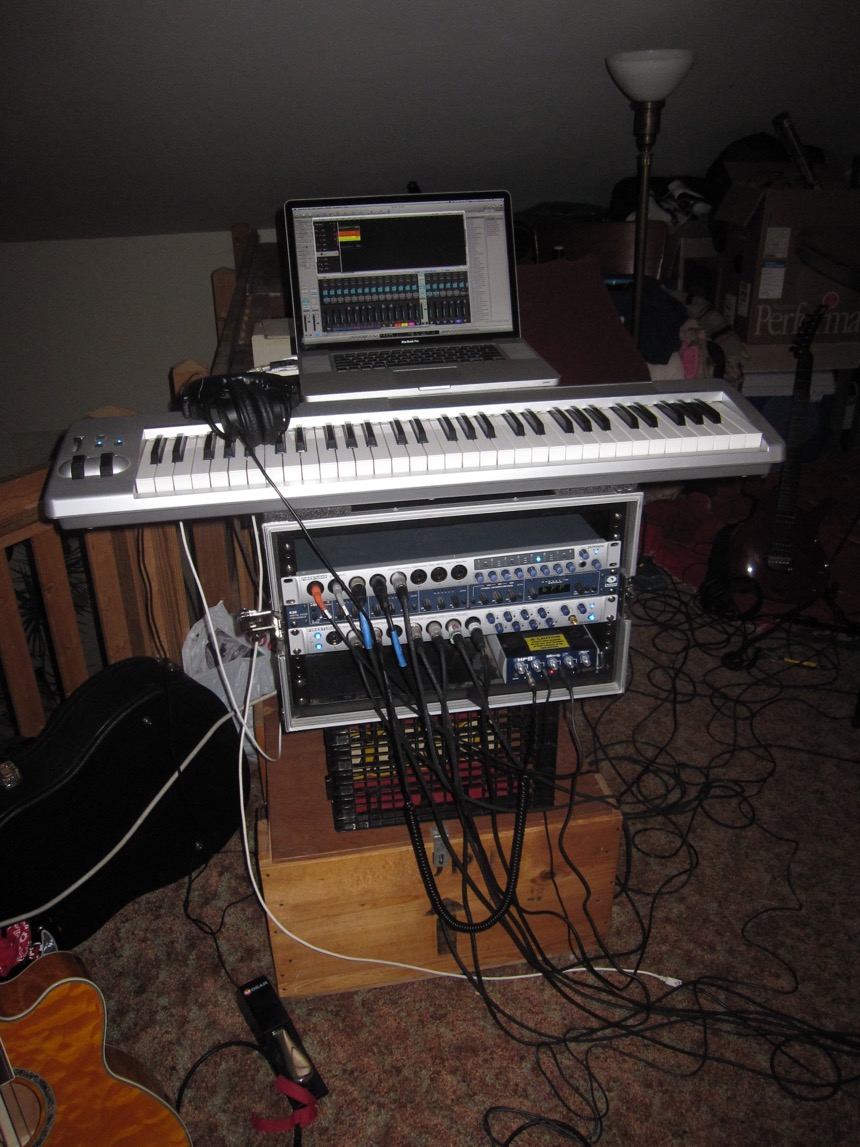 We sent the electric guitar and bass direct into the computer and all wore headphones. We did our usual, unusual all-improv rock thing, and came up with a few gems, two of which I put on my 2013 album all over the map. The first of those I highlighted a few weeks ago, called "I can't stand it", and that one actually segued right into this one, although I edited them to be separate songs. Pete sings quite a bit on this one, and the lyrics (such as they are) make reference to a few recordings that Tim and I did back in the early 80s on some tapes we called The Tim and Andy Band that have unfortunately not been digitized yet. Tim and I were 15 back then, so please excuse the crude reference to grabbing something that rhymes with "walls". [Update Aug 2017: those 10 albums of The Tim & Andy Band tapes are online now! Check out Baby and Baby II and the mangobananas picks! Tim & Paul & I also paid homage to this adolescent classic in 2010 with baby (part 17) from 2010's chimney cats.]

While "I can't stand it" was just mixed down from the original multi-track recording of drums, bass, electric guitar, and vocals, this one needed more work. The sections where the bass and electric guitar drops out and there's a progression of cool chords on piano and acoustic guitars were overdubbed back home because Pete inadvertantly dropped down a half-step on the fretless bass while I was wandering on the electric guitar. (This was only possible because there was no bass or guitar bleeding into the drum mics since they were recorded direct!) I also added the auto-wah (envelope filter) effect in places to funk up the guitar. I intended to take it a step further and overdub a chorus of backing vocals singing "baby" near the end, but never got around to it. Still, I love the energy of this improvisation, and especially love the way Jon's drum fills sound in that loft space. I miked his kit using just 4 mics using the Glyn Johns technique, which is by far my favorite way to get a big, realistic drum sound that incorporates the room sound, a wide stereo field, and still gets a tight kick and snare sound. In the pic below you can see the two Audio-Technica AT2020 large-diaphragm condenser mics, one high over the kit on Jon's left, one down pretty low on Jon's right, both equidistant from the snare. You can also see a black boom stand reaching in toward the snare drum which had an EarthWorks SR77 small-diaphragm condenser mic on the end, pointing down at about a 45 degree angle toward a spot about 2 inches from the rim. You can't see the CAD KBM412 kick drum mic pointing toward the hole in the front of the kick drum. 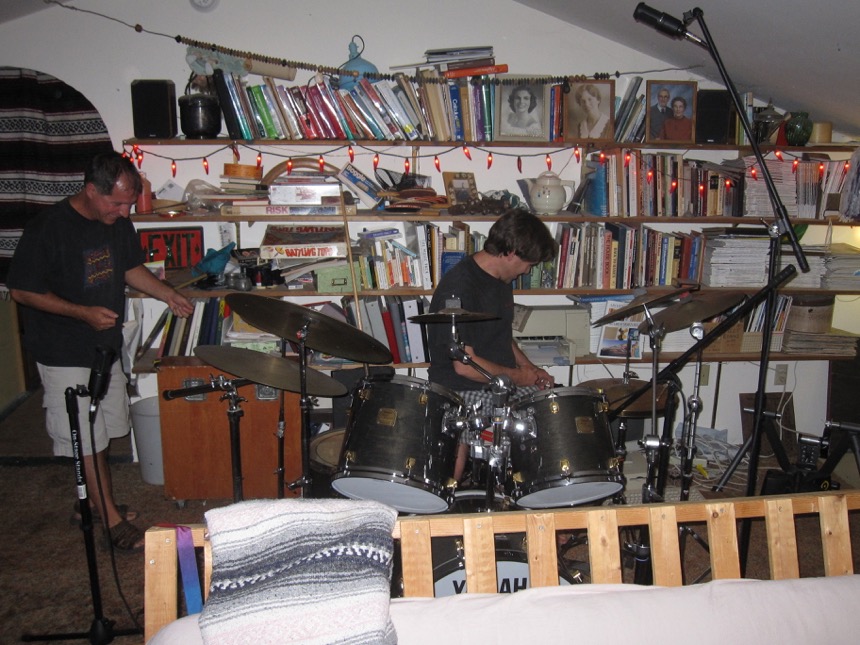 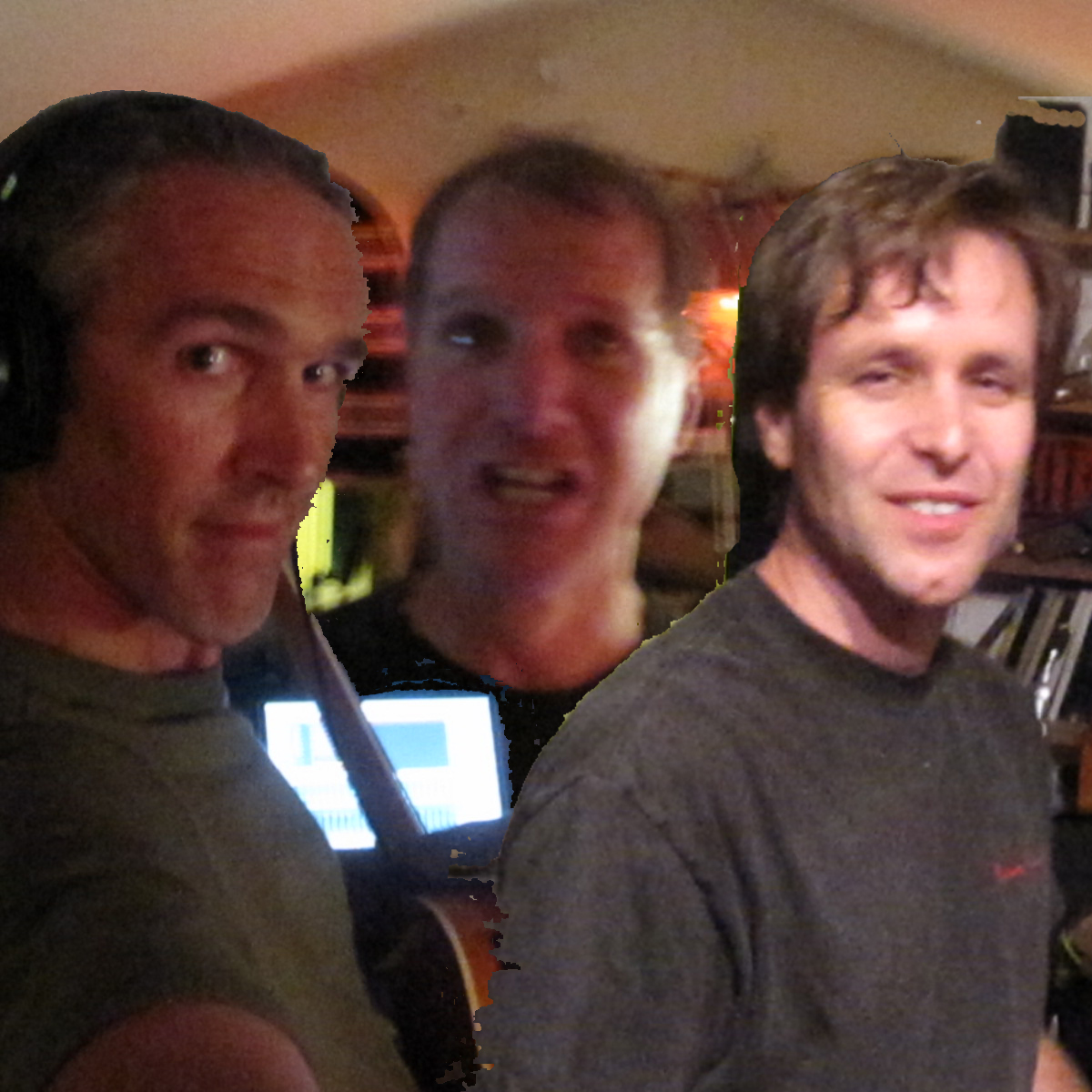