For my real job, I manage projects to help customers like Panasonic and Harman-Becker integrate Nuance's speech recognition, speech synthesis, dialog management, and handsfree software into car "radios" --which are now usually called "infotainment systems". We recently had a bug report from a customer's pre-release testing that a song title that had something like "Charles III" in it (Roman numerals) was being pronounced by our speech synthesis engine as "Charles aye aye aye". Since then, this song has been stuck in my head. 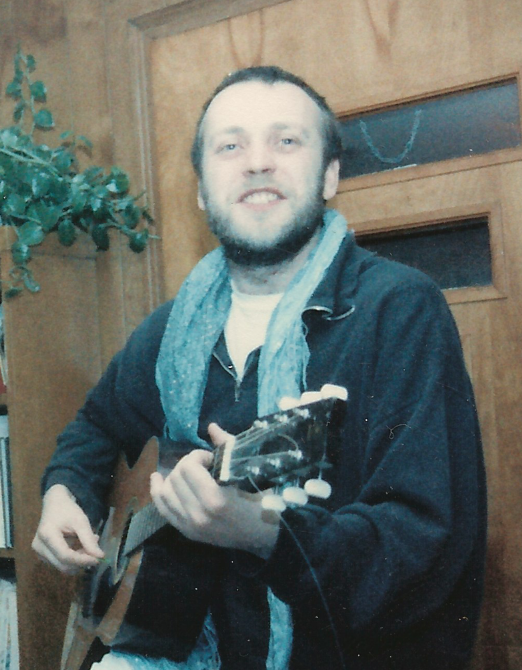 This is from the Cranbury Road Studios sessions, which was when I took a leave of absence from Cornell in the first half of 1986, and ended up living with some people that included a guy named Paul who owned a 4-track cassette studio and a couple of electric guitars. I've written about that awesome semester in London before. Well, every now and then Paul and I did a little studio time together, and I think this was the first of those sessions. Paul came to call our work together "Paul Explosion and the Digitally Insane", and this was pure Buddy-Holly-style joy.

Recorded in Cranbury Road Studio, our flat's basement TV den with Paul's Yamaha MT-44 cassette 4-tracker. First there was a simultaneous recording of me and Paul playing electric guitars, Paul towards the right playing strummy, me towards the left playing almost damped rock&rolly things. Then a stereo bounce to add Paul playing percussion guitar, panned from ear to ear as I recorded him. Three more stereo bounces got Paul's really happy vocal and two tracks of me and my girlfriend doing harmony backing vocals. This is on The Andy Band album "the pops", one of four CDs made from those Cranbury Road Studio sessions (others here, here, and here).