In my band Everything But Anchovies, Tim usually wrote the lyrics and I'd come up with a song idea, then bring it to rehearsal to flesh it out with the band. 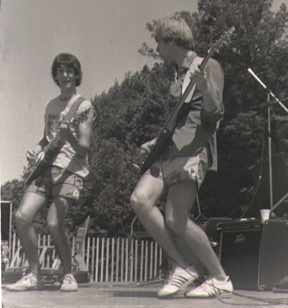 One of our favorite bands was The Police, and 1983 was the year of their 5th (and final) studio album, Synchronicity. I loved the song Synchronicity II, and E.B.A. covered it, but I actually preferred the first two or three albums of reggae-influenced new wave rock to this album, that seemed to me too over-produced and heavy with synthesizers and Sting's schmaltz. But "Every Breath You Take" was the first single, and was released before the album, and my girlfriend bought the 45. The 45's B-side was this really dark and jazzy song called "Murder By Numbers", that had some killer, inscrutible guitar chords by Andy Summers, and the epitome of Stuart Copeland's synchopated 3 over 2 drum playing. I was mesmerized and entranced, and it stuck in my head for months, maybe years. I'm pretty sure I was aware of trying to cop something of the feel when coming up with music for these lyrics. The first three chords of the progression are simple enough, Gm, F, and Cm, but the fourth is some sort of A-flat with a flat-fifth. I remember going to my older brother late one night and asking him what to call that chord. Abb5? Anyhow, once I took the progression to the band, and Tim came up with the killer rolling bass line, and Jon the RotoTom-enhanced 6/8 drum beat, we knew we had something of our own. Audiences loved it. I often went way, way out there on the solo, which I didn't do much in that trio. 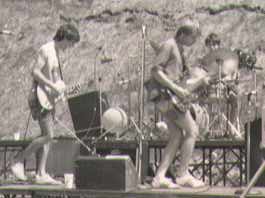 Lyrically, Tim painted some memorable images. The lyrics were written in October 1983, after Tim had left Ithaca to go off for his freshman year at Hartwick College, in Oneonta, NY. I'd stayed in Ithaca, going to Cornell, and Jon was a senior at Ithaca High School. It was only a couple of hours to Hartwick, and we'd decided to officially keep the band together --rehearsing on occasional weekends in preparation for our first bar gig, at Kelly's Dry Dock in Ithaca, on Thanksgiving night! We'd stayed in touch with paper letters (carried by the USPS --this was before email!) --that's the first verse. And we'd burned up Interstate 88 and routes 206 and 79 visiting each other --that's the second verse.

Recording notes: this was from the seminal Brown Carpet Studio session of Dec 1986 - Jan 1987, 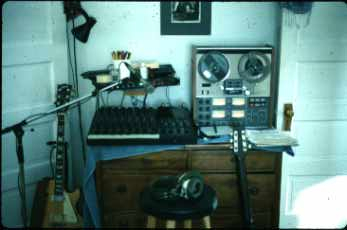 recorded in my apartment on Stuart Avenue over the holiday break. We recorded the backing tracks of drums, bass, and guitar live together, with Tim's bass amp in the front sitting room, Jon's drums in a big empty room just beyond that, and my guitar amp in a narrow room beyond that -shotgun style. So Tim and I could stand in the doorways but keep the sound of the drums out of our amp microphones, and vice versa. We overdubbed my vocal and lead guitar solo. The bummer I hadn't remembered, but found in the recording notes, was that we'd gotten done with all the backing tracks and discovered we'd accidentally taped over the backing track for this song. So we'd had to do that one again. It was, I think, the only second take. We really had these songs down.