I wrote this one 16 years ago, in April 1999. That was before I got Apple's Logic Pro software for recording, with all its virtual instruments and MIDI sequencing. Back then I used OSC's Deck II software, which just works with audio (not MIDI). My typical recording process started with finding a drum loop, then building on top of that. My band Killer Whirlpool had amassed a huge collection of tapes from our weekly improvisation sessions, and sometimes I'd find bits of someone playing a cool drum beat by himself and I'd slice out a loop or two. In this case, the whole band ended up in the samples. And the loops were long. It gave me a really rocking backdrop over which I layered some spacey guitars and vocals. 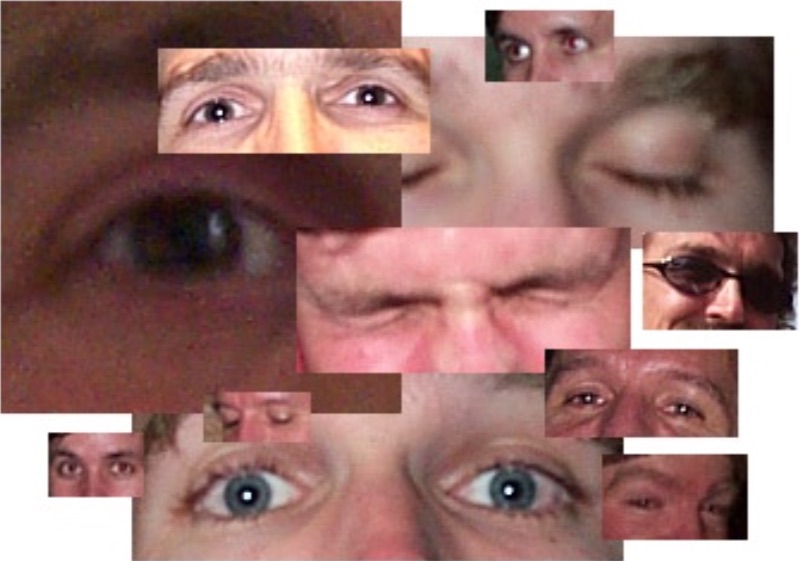 The lyrical inspiration came from my short commute to work every day. I'd drop off Barbara at Cornell then go downtown to the office where I worked for Nokia. I know Ithaca's a small city compared to Boston or whatever, and my commute was just 15 minutes, but sometimes I'd take a quick glance at the face of every driver going by in the opposite direction, wondering where they're going and what they're thinking. So many anonymous faces, so many eyes peering out.

Working title "march". Killer Whirlpool tune "Tom's greenhouse" from 4/24/98, sampled, thinking something could layer over, words, a tune, something, but I got too tired and went to bed. 12/30/1998. Remembered again 3/29/1999, when I really got into it, working out the loopable sample bits that weren't too scattered and out of sync. There's a 45-second build up intro, plus an eight-second loop alternating with two copies of a four-second loop for the body, then a 4-second break piece and a thirteen-second ending bit. This was pulled from a 2:38 sample from the original cassette. Happy with the loops, I plugged in the electric with the Ibanez Soundtank digital delay pedal and the DOD Bi-FET preamp, got a wet, juicy sound going, and dropped two tracks of soaring open intervals moving up the neck ("space gibson"). Then I popped off the delay and did a quick take of a little damped riff ("clickety gibson"). Way funky and dreamy, I'm gonna let it soak for a few days or weeks until the melody and words come to me. This is a healthy obsession. With Nokia, Good Friday is a holiday, so I'm home alone with the microphones, laying down vocal track after vocal track on this thing, 4/2/99. It's really three-part harmonies, but four tracks. The first take of the main vocal is mixed a little low and has a Deck multitap effect going. The second take is a unison part that became the main vocal track. Then 3 and four are successively building harmonies. I did some major surgery on the song structure then, focussing on the A-F-ish vamp in the beginning where I'd felt inclined to go "doobiddy-doobiddy-doobiddy-doobiddy-doo!". I found a slice of that and inserted it between the third and fourth verses. Fucking wonderful!!!"