This is a classic from my band Everything But Anchovies, written in July 1984. I can't say much about the lyrics, which have a healthy dose of Tim's intentional enigma technique. But I do remember coming up with those funky guitar parts, and I remember a lot of gigs where a lot of people danced to this upbeat groove.

The summer of 1984 had been pretty busy for us. Jon had just graduated from Ithaca High School, Tim had finished his freshman year at Hartwick College, and I'd finished my freshman year at Cornell University. And the band was still together, which wasn't a certainty a year before. As I wrote in the "Raid Records" (our band diary), "we had a great summer. Jon fell in love with Europe; Andy experienced East Lansing with the Downeses (see pic), 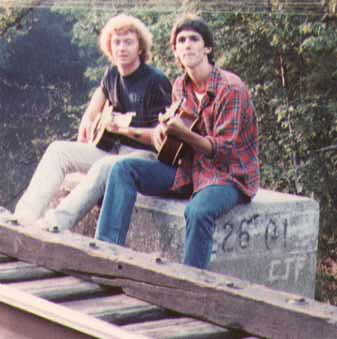 a weekend in Philadelphia, and trips to Martha's Vineyard and Maine; and Tim took a trip up to the Kostrub's family land up north. The summer culminated in a magnificent trip to the Adirondacks: Geoff and the band drove up the day after our funny and fun gig at the Interlaken Olde Home Days". I'll never forget the deep stars up there, and good laughs and canoeing. We had a gig at The Nines booked for October 20, and were really happy that we had "almost had enough songs to make our sets at the Nines with songs we really like to play". (Pic from that gig below.)

We were in a nameless limbo that summer, having decided we were tired of the bug spray jokes and punk associations (Black Flag), and before the Nines gig we decided to call ourselves Everything But Anchovies. The name came from a menu item at Domino's pizza, which was of course a pizza with everything but anchovies. We'd never ordered it, but we'd been ordering pizzas for our Saturday night rehearsals/jams in Jon's basement for years. In fact, we'd recently passed $2000 spent on pizzas, and every box was stacked up behind Jon's drums.

In September, after everyone had gone back to school, I wrote a poignant entry in the "Raid Records": 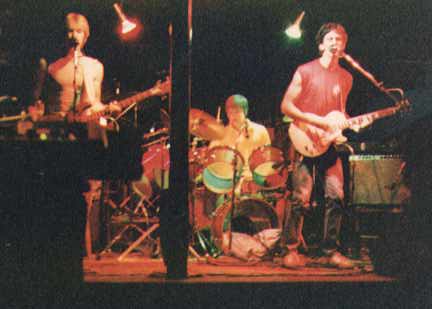 I went down into the basement the other day to get my equipment. The concrete concert hall was so quiet that it was almost haunting. Pizza boxes hollowly blanketing a wall, unwanted slices petrifying in a pile, and Jon's drums were deafeningly silent. The place was a mess, as usual --papers scattered all over. It's amazing that the place hasn't began to reek. Well, occasionally a waft of some unusual odor will come forth for a little while, but it never stays long. That place is so great. We should contact the people at the Guinness book of world records about that pizza box collection. We could make some dough (pun intended) advertising for Dominos.

In the fall of 1989, Jon's parents wanted the boxes out of the house, so we posed with the pile on their back deck before they were trashed. There are some stunning tallies from late 1986. 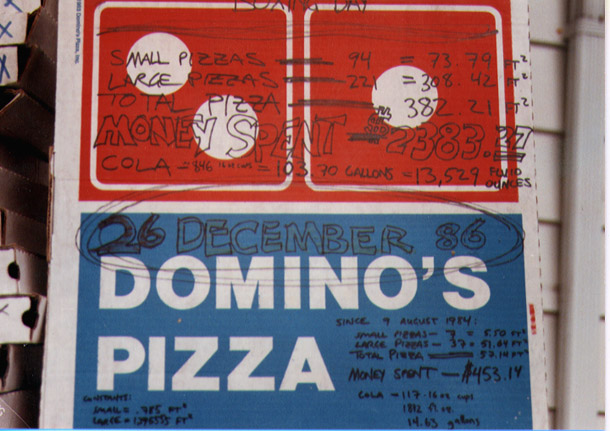 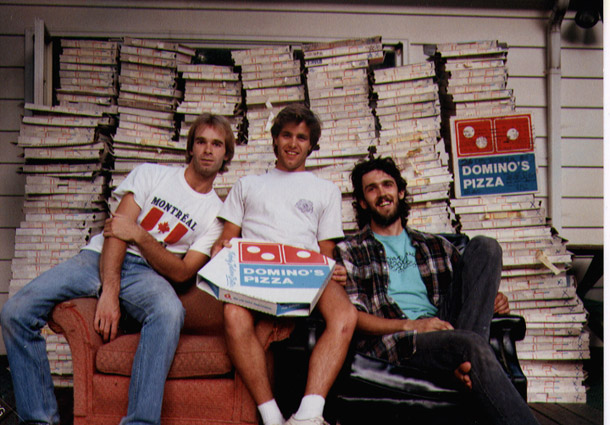 This recording is from almost 30 years ago, from the Brown Carpet Studio session. I overdubbed an acoustic guitar, and Tim's and my vocals were overdubbed simultaneously to one track, but the electric guitar, bass, and drums are the three of us totally grooving live in the studio.