As I've written about before (see "dreaming dog", "want need give", "octal optics", and "your truck), I spent three weeks house-sitting and pet-sitting for my son and daughter-in-law in 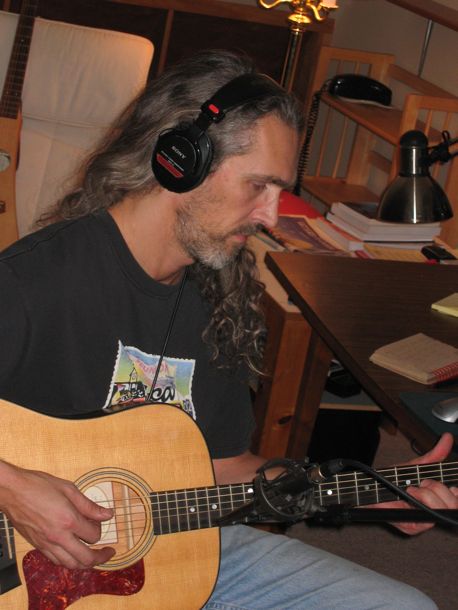 December 2007 at their house here in Brownsville, VT, and I set up mangobananas studio in the top floor of their house. (Barbara and I didn't move a few miles away from them until 2010.) Every night for the first two weeks, I'd start with a recording of a completely fresh improvisation, then move on to a more produced, multi-tracked recording. I started on December 10, 2007, and this was the third night in a row, December 12. Here's what I wrote about it in the studio log:

Wed 12/12/2007 got this groove outa nowhere --- well I was thinking about the Chili Peppers' "Pea" when I tried to get a tempo and drum riff and guitar parts. But this grew way off on its own trajectory, just what I wanted, stuff is flowing flowing flowing. Created drum loop, then recorded 8 bars or so of acoustic guitar with two mics, then recorded piano parts with MIDI keyboard and some matrix editing for that odd and cool as hell B part. Then did the vocal take, just improv (and used the NT1A and AT2020 simultaneously for comparison, think the NT1A wins on body). Then did the real bass take, direct input of course. Not sure what else I'll do with this, but it's got a great feel.

As for the title, I'm afraid this is another example of a typical problem for me: I often start recording music for a song before I have any lyrics, and this means I usually don't know the title yet, so I just make up something for the project name. I think I'd just had a big serving of rice and beans for dinner.

All the more-produced, multi-track recordings from that December 2007 session in the Big Green House were released on my 2008 album snowcats and sundogs. 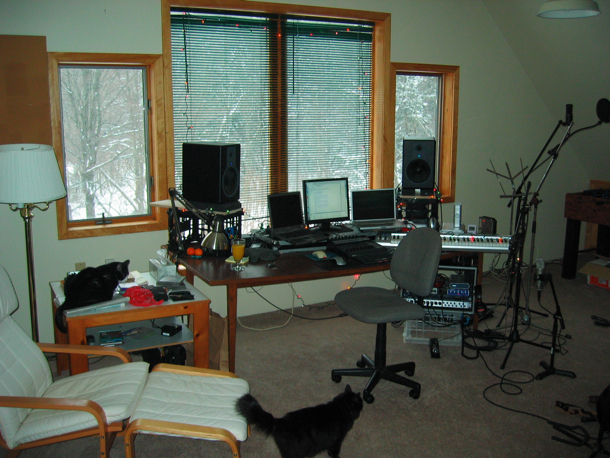