This is a classic tune from my band Everything But Anchovies. We'd often save it for the end of the night, and had people dancing and singing along with the la-la-la-la-s and screaming the wa!-s. Musically I know we were pretty deep into the Police and The English Beat, and that pop/reggae/ska blend inspired this tune.

Lyrically, I can't really speak for Tim, but I know the words were written in October not long after Tim had left Ithaca for his freshman year at Hartwick, and I'd started at Cornell. I know we were wondering if the band would survive to fulfill the destiny we'd always felt would be ours: world-famous rock stars. We'd decided to keep the band going, even booking some weekend gigs in Ithaca that Fall. The first at Kelly's Dry Dock on Thanksgiving night. This was one of a few new songs we wrote, along with a batch of new covers, to prepare for the gig. We wrote this one, described in my band diary as "a really, really fast reggae/ska spastic thing that is a lot of fun to play but really tires you out. Complete with la-la-s and WA!-s, it's just about the craziest thing we've written. But it's good." Other new material we put together for this gig were the originals "A Crooked Line" and "Let It Slide" and covers "I Will Follow" by U2, "Mystery Dance" by Elvis Costello, and "Pulling Mussels" by Squeeze. 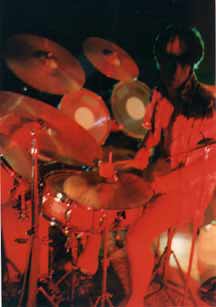 Recording notes: this is from the infamous Brown Carpet Studio session, from December 27, 1986 through January 3, 1987. The setup has been described in great detail in a previous post, but it was a stereo recording of the band playing live, captured with 6 mics and two DIs, then the vocals were overdubbed. I think Jon even got a backing vocal credit for his help with the WA!-s. Ended up on the album Brown Carpet & Full Moon.