This is definitely one of my favorite old E.B.A. songs, and I remember our fans really liking it, too. Please hit the play button up there, crank up the volume, and let me tell you some stories about this one. 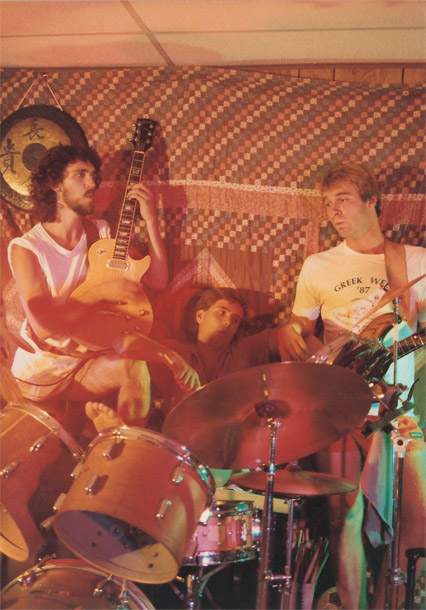 Tim wrote the lyrics during a party at Mike Kesten's apartment on Williams Street in Ithaca, on January 3, 1986. My journal mentions how Tim wrote a new lyric in another room while I was showing Jon some of the poetry I'd been writing during my just-completed fall semester of my junior year at Cornell. Tim and Jon were back from their studies at Hartwick and Hobart, respectively, and we'd jammed and partied quite a bit. But a few days previous to this party, I'd announced that I was going to go to London with my new girlfriend, who was going for a semester abroad for her studies at Ithaca College. I'd be leaving mid-January and not be back until late June. This party was partly a Christmas gift exchange and partly my going away party, because Tim and Jon both were going to be leaving the next day to go back to school. Actually, Tim was spending the next month or so in Ireland, for a January-term abroad program. We were talking about the possibility of my making a trip from London over to Tralee to visit him in a few weeks. So, that was the background that inspired Tim's lyrics.

Indeed, my girlfriend and I took a long weekend around January 30-February 2 and made the trip. It started with a long train ride out to the coast of Wales, then a sickening overnight boat trip across the Irish Sea, then more trains out to Tralee. Some fun times were had with Tim there, including dancing at a club and the partying that inspired the phrase "gravity is getting me down" --which I wrote and recorded a few weeks later, and became a popular E.B.A. song. The day after returning from that trip to Ireland, I spent some time in the basement studio in my flat in London, where I'd been learning how to use the 4-track cassette console, and had recorded 20 instrumental doodles already in the first two weeks living there. Here's the studio log for this song: "A full fledged song at last! Back from Ireland with a cold, I finally was feeling the 'Small World' inspiration, despite 24-hour journeys and all." That first demo is here.

E.B.A. fleshed it out and played it enthusiastically for years. We made a really good recording of it during the Brown Carpet session in late 1986, then we re-recorded it in Full Moon Studio in April 1988. 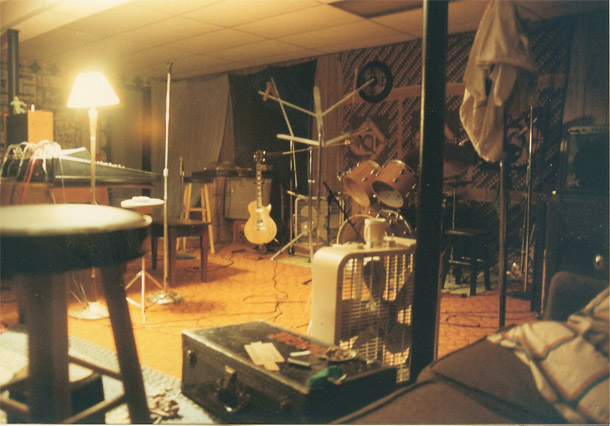 That's this version, which is not changed much from the Brown Carpet version. Both are on the Brown Carpet and Full Moon album. It was recorded on my Tascam 4-track reel-to-reel with a rented mixing board. I think we had 4 mics on the drums, one on the guitar amp, and one on the bass amp, and we might have had direct ins for the guitar and bass, too. But all those tracks were mixed live and printed to two tracks. Then I overdubbed acoustic guitar and vocals in the other two tracks and made a stereo mix to cassette.

In 2005, Tim moved to England with his wife, and in early August they came back for a two week visit to family in the States. This included a trip to visit me and Barbara in Vermont, which was a thrill. It was especially cool that he timed it so he could jam with me at the Skunk Hollow Tavern Open Mic, where I play just about every week. 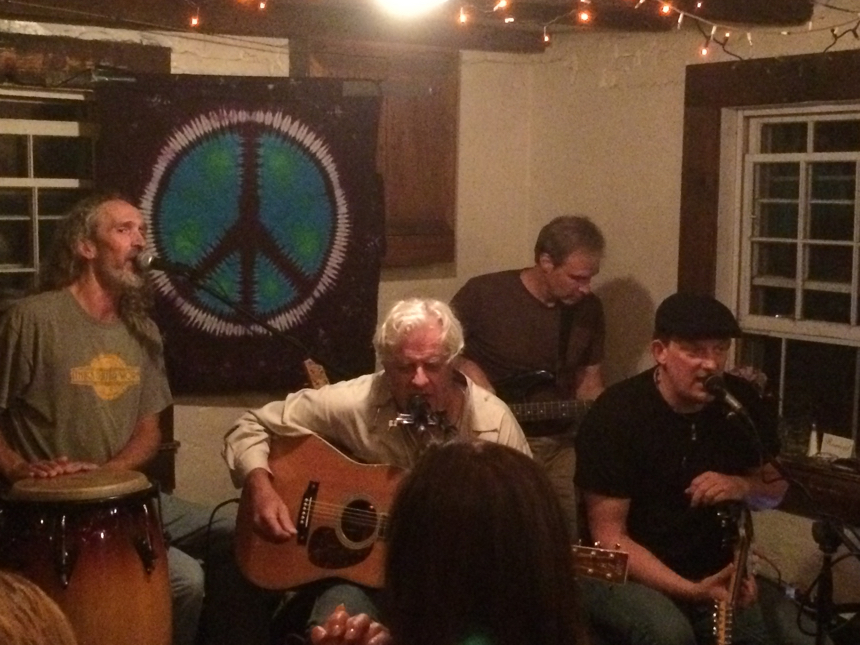 We played together backing up Woody (pic), and for my set we played this song as well as the E.B.A. songs "See It All" and "Last Words", and my songs "sunsets" and "Caico". What a blast! A week later we jammed for three days back in Ithaca with Killer Voyage --our buds that go way, way back. That massive, incredibly fun session is being mixed down and will be released later this year.

Back in 1986 when this was written, we were sending AirMail letters back and forth to stay in touch, maybe once a month. Think how much smaller the world is now with email, Facebook, Skype, and smartphones. Awesome times!